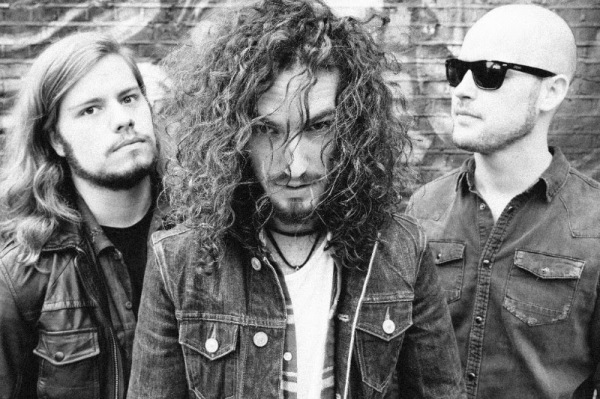 UK hard rock trio RavenEye release their stunning debut album ‘NOVA’ on 23rd September via Frontiers Music srl, which has already received numerous rave reviews, and the release of four songs from the album has created a mammoth buzz across social media, as the excitement builds for fans in anticipation of hearing the album in full.

Frontman Oli Brown very kindly took time out from the RavenEye’s hectic touring schedule as the band are currently on the road in Europe supporting Zodiac, having just returned from headlining the Dome Stage in Brazil and Argentina at Maximus Festival, to give the low-down on ‘NOVA’ and taking things beyond their limits.

Frontiers Music have recently signed you at a time when being signed by a label is becoming increasingly difficult for bands. How did that come about?

They heard about us and everything we’ve been up to over the past year. They got in touch with us towards the end of last year and mentioned about signing. We were hesitant to join any record label as being independent was a proud flag to wave for us. People’s perceptions change when bands get signed, we really didn’t want that. But Frontiers really respected that and were so great to talk with and completely got our vision and sound for the band. They trusted us to record the album that we wanted instead of A&R’ing the songs, telling us what to put on the record. We’re really lucky to be part of such a wicked team.

Do you think the record deal shows both a confidence in your music and that the rock genre as a whole is experiencing a resurgence in popularity?

I don’t know! We’ve never really thought of it like that at all. Our focus is in the music we create and creating something to the best of our ability, pushing ourselves musically and as a band in every way we can. We’ve got tunnel vision with this band, we live and breathe RavenEye, so our focus is less in the surroundings and more just doing what we can do to achieve what we believe this band is capable of.

Those that already are fans are going to love the album but how would you describe ‘NOVA’ to those that haven’t heard your sound ?

For people who want to enter the supermassive sonic atmosphere of hard rock mixed with a love of classic influences of Hendrix, Zeppelin and love for 90s Seattle grunge.

What was the inspiration behind the artwork for the album?

It’s about manipulation, good and bad. Hands constantly interfering with the human body and mind, every new person we encounter changes us or effects us in some kind of way, and that’s what this album is about. The space in the background is more of a representation of the sound of the record rather than the content; the room we recorded in was this massive, massive space so we took advantage of it and had mics in every corner of the top to create this huge live sound.

Production on an album can make or break it and Warren Riker has done an excellent job, did that allow you to be more creative with the record?

When we went into the studio we created pretty intense demos with all the sounds and ideas we were looking to achieve, obviously Warren helped realise the final sounds with a real room and his incredible ears. He was there at the birth of the band and is like another member of this band. He gets the vision and the sound, so when looking for tones and approaches to songs, he was in the exactly same space as we were. It’s an awesome thing to have a relationship like that with a producer.

You’ve mentioned previously there were about 30 songs to chose from for the album, was it a difficult decision to decide which ones would make the final cut?

It was a very natural decision for us. There are songs that we love that didn’t make the record, but they just weren’t right for this album. It’s our debut record so we wanted the sound to be more on the edge of the seat and high intensity! We wanted the first impression to be a true representative of our energy in our live shows.

The ‘Breaking Out’ EP was written by Oli before RavenEye was formed, was writing the album as a band easier by being able to bounce ideas off each other, or were there a few diva moments over how it was written?

Haha definitely no diva moments. At the end of the day, the songs are always above us, as soon as egos take over than it would screw with the writing too much. Between Aaron and I, lyrics came out comfortably; sometimes it would be harder to write than others, but we’d never let our opinion take the better of the song, we’d always agree with each other when a line was better. I honestly couldn’t say who wrote what lyrics between us now, but we had the same vision when creating these songs.

After blasting the ear drums with blistering rock over 10 of the tracks, the final song ‘Eternity’, which sounds beautiful, shows a different side of RavenEye. Do you think it is important to have contrasts on an album?

For us it definitely is. We don’t want to just have one sound that blends from one song to the next. For us that’s not interesting or challenging. It’s finding that balance that still sounds like RavenEye, but still pushes us as artists and writers, it’s almost more challenging writing them all to connect to each other enough so it doesn’t all start going in completely different directions.

We described ‘Walls’ as being cinematic, when you wrote it did you hear the song as having a bit of a Bond moment?

Haha in the studio for sure! That was completely unintentional. The idea came when we had a day off in Vegas. We were about to go out and then I had this little idea I wanted to develop, we then spent the rest of the night in the hotel writing it. When we looked at writing this album we wrote as many songs as we could and found the holes in the record we wanted to fill with different atmospheres and sounds. I love writing last minute because you think a little differently, you’re not just thinking of writing songs for the sake of writing more songs; you’re trying to find that sonic space you haven’t touched yet to try and push the album to a different dimension. That’s why Walls is bang on half way through the record, just to shift the mind instead of letting it drift off when listening to the record. All the sounds and melodies we went for changed, we wanted the bass to really lead this song which you can hear from the start. (Favourite bass tone of the whole record)

You introduced ‘Hate’ on your UK tour this year and the album version has a couple of changes. Was it easier to develop the sound of that song for the album having tried it out live first?

Playing them live was really just a necessity as we were headlining shows without enough content! Haha! But it’s always fun road testing songs. In the future, whether we do this as much as we have over the past year is up for debate. There is something so exciting about releasing an album with songs that you have no idea about! The only thing that we really were struggling with for hate was the Bridge; getting something frantic, heavy, not so busy. It didn’t come together until we just tried out this idea in the studio as a quick thought to give a go. It’s so much more brutal now.

‘Hate’ tells it like it is, was it just a culmination of all those situations where someone has peed you off?

Absolutely! All of our songs are a culmination of situations, feelings that relate closely to us. We’re very honest with our emotions in these tunes!

You have toured with rock icons Slash and Deep Purple and appeared at major festivals such as Download and Hellfest on the strength of the debut EP. With the release of the album, what are you hoping that will to lead to next?

At this point, it’s hard to look past what’s coming up ahead as we have so much to organise with it all! Whatever journey this record takes us on we’ll be pushing ourselves harder and harder as a live band and writing more songs, taking this beyond our limits. This journey doesn’t end for us and we aren’t taking a backseat any time soon.

The European tour with Zodiac has just started and taking you into your own headline UK tour next month, is touring something you look forward to the most as a band?

Definitely. We belong on the road, we love to entertain and be on the stage. There’s nothing quite like playing your own songs live on stage and seeing them connect with people, as song writers that’s a dream for us. Looking at people singing the lyrics back at you, it’s the best feeling.

….and finally, with reviews starting to come out, what would be your soundbite for ‘NOVA’?

Thanks for taking the time to answer my questions and wishing you all the very best for the new album, it sounds incredible.

Thanks so much for the great chat!!

‘NOVA’ is our best album of 2016, you can read the review in full HERE