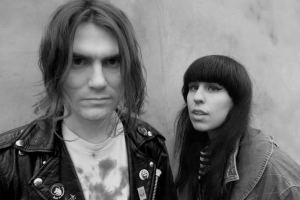 Birmingham, UK, based Table Scraps, have announced the release of their next single ‘Motorocycle’, taken from their debut album ‘More Time For Strangers’.

Barely a year old, and yet the duo of Scott Vincent Abbott (formerly of The Big Bang) and Poppy Twist (formerly of Poppy & The Jezebels) have already developed a sizeable reputation for their fuzz and tape-echo drenched punk noise, built over a stand-up drum set and a single guitar fed through four amps.

And while their debut single release ‘Bug’ was a highlight of 2014 – coming in at just a minute and a half long (“because that’s all it takes”) and picking up widespread praise – the bands’ full-blooded, fuzz-driven assault ‘More Time For Strangers’ emerged this June to an excited fervour.

‘More Time For Strangers’ is out now as a limited edition 12” vinyl and digital download through Table Scraps’ own Hells Teeth imprint in the UK, and on cassette via Burger Records subsidiary Wiener Records in the UK and US.