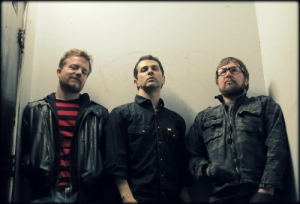 Funeral Horse return to the fold this September with a brand new album ‘Divinity For The Wicked’, which is set to be released on 15th September through Houston based Artificial Head Records.

Like a vision of ’80s post-hardcore punk rock, red-eyed and burning one in the back of Heavy Metal History 101, under the influence of The Melvins, Kyuss and Harvey Milk, Funeral Horse make music to gouge minds to. The album showcases one of the many strutting rock assaults the trio have become expert in peddling. This is Funeral Horse at their darkest and most pensive and suggests there is more than meets the immediate ear this time around for a band already masterful in the delivery of unfiltered noise and heavy fuzz rock.

Following on from last year’s imposing ‘Sinister Rites Of The Master’, and the thunderous lo-fi highs of their 2013 debut ‘Savage Audio Demon’, amid a mass brawl of riffs, megaphonic vocals, blues and backwater proto-metal, ‘Divinity For The Wicked’ stands as a humble monument to the marginalised and maligned. An album just waiting to be picked up and played by those that have chosen to drop out and dedicate their entire existence to the pursuit of volume.

The band have also premiered a new song ‘Gods of Savages’ in advance of the album release.

‘Divinity For The Wicked’ Tracklisting:

1. There Shall Be Vultures
2. Underneath All That Ever Was
3. A Bit Of Weed
4. Gods Of Savages
5. Yigael’s Wall
6. Cities Of The Red Night
7. Gifts Of Opium And Myrrh