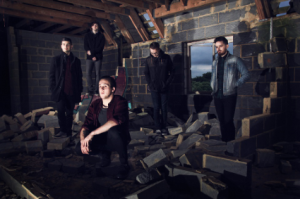 Vera Grace are set to release their latest EP ‘Novella’ on 17th August, which will be available in digital download and limited CD formats.

The new 6 track EP from the Oxfordshire based quintet follows a story, as it winds its way through the scenes of losing faith, heinous crimes and murder – all told by vocalist Stephen Nulty throughout the 20 minutes of the EP.

The band have also released a new video for ‘Catharsis’, which is the lead single to be taken from the EP.

‘Novella’ is a concept, set as a play wit each track representing a scene. The play revolves around two separate stories that entwine with each other throughout. The tale sees a man who loses his faith and commits terrible acts, resulting in him killing a man. The result sees repercussions of his actions and the story branches yet further. The lyrics imposed on the new material contain frontman, Stephen Nulty’s meanings, which relate to personal issues in his life.

‘Novella’ will be released digitally and will be accompanied by an extremely limited physical edition; the EP on CD with a one of a kind handmade cover, individually numbered from 1 – 100. These are to be sold exclusively at shows. The hand numbered idea came about as the band wanted to reward their loyal fanbase, for their continued support.

With relentless ambitions, Vera Grace have had the honour of sharing the stage with such acts as 68’, 36 Crazyfists, Feed The Rhino and Devil Sold His Soul to name but a few. With their hearts in this, Vera Grace will be on the road as much as they possibly can this year.

Novella is available for pre-order from their webstore: http://veragrace.bigcartel.com/