Kyng Are On Fire With Second Album 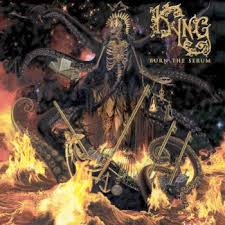 Kyng have followed up their debut album ‘Trampled Sun’ released in 2011 with a second album ‘Burn The Serum’ this year which made it into a number of ‘Best Of’ lists, and with an album of this high quality it is an obvious choice.

Los Angeles based Eddie Veliz (Guitar/Lead Vocals), Tony Castaneda (Bass/Backing Vocals) and Pepe Clarke (Drums) formed Kyng in 2008 and after the release of their debut album signed to Razor & Tie Records in 2013, culminating in the release of ‘Burn The Serum’ in April 2014.

This 11 track album is full of heavy riffs, with an influence of metal and stoner and a heady dose of rock that kicks butt from the very first note on the album. Opening with the title track ‘Burn The Serum’ the monster riffs resonate through the track, powerful and melodic vocals, pounding drums and riff upon riff flows through the song. ‘Lost One’ ups the pace with gritty guitars and melodic harmonies that intertwine through the track with a grungy sound. ‘Electric Halo’ with a catchy vocal that grabs the attention from the start, slightly slower than other songs on the album, the bass is sounding sleek and the drums sounding epic before a soaring guitar solo is heard. ‘Sewn Shut’ has more of the heavy riffs that produce a lush backing to softer sounding vocals but still sounding a powerful track. ‘Faraway’ starts with an almost mournful sounding guitar before the riffs at times mirror the vocals, sludgy and dirty sounding it’s a massive sounding track. ‘Self Medicated Man’ is a riff drenched track from the start, with more soaring guitar solos and vocals that resonate throughout the entire song.

‘The Ode’ is full of epic sounding riffs that make this track sound far more than just 3 band members being able to make rock music like this, with more of those melodies and harmonies sounding huge on the track. ‘In The Land Of Pigs’ has thumping drums from the outset and harks back to a more retro sound to the days when metal was at the forefront of music but still sounding entirely modern. ‘Sunday Smile’ may sound a sweet title but there is nothing sugar coated about this track. Riffs which are heavy and dirty along with an epic rhythm thump through this track. With the vocals sounding awesome on every track, again this is another killer song on the album. ‘Big Ugly Me’ is more of that signature Kyng sound that assaults the ears from the very first note before there is more delicate end to the song that fades gently in the final notes. ‘Paper Heart Rose’ brings with it a change of direction and is a stripped down song, gentle acoustic guitars float behind melodic harmonies with a soaring backing vocal to bring what has been an epic second album from Kyng to and end. With a range of styles, every single song on the album full of great tunes, riffs and vocals and is one you are going to want to keep playing for a long time to come.

Kyng have released a brilliant second album with ‘Burn The Serum’ that delights the senses as soon as you hear it and definitely has to be one of the best releases this year. You can understand why it ended up in so many lists for 2014.

The website for the band is http://www.kyngband.com. They are on Facebook http://www.facebook.com/Kyngband and Twitter @kyngband. The album is available from iTunes, Amazon, Best Buy and GooglePlay. They are also on Spotify.