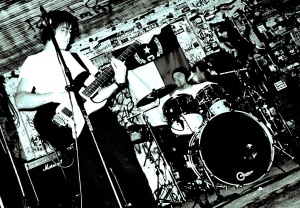 Charlotte, NC based TIDALWAVE released their debut EP a couple of months ago which has been picked up by numerous radio stations in the US and is an excellent debut from the band.

Formed in 2012, members Dean (Vocals/Guitar/Bass) and Matt (Drums) are part of the new wave of bands that make an impressive sound with just two members and the self-titled EP is a massive sound that is full of heavy riffs, thumping drums and melodic vocals throughout.

This 4 track EP is full of songs that pulsate from the very beginning. ‘Find Myself’ starts with a heavy riff before the melodic vocals surge through the song. A dirty sounding riff is present through the track that is a strong start to the debut release. ‘Rx’ has a crunchy sounding guitar riff that almost vibrates through the song before the vocals soar over the pounding sound of the rhythm section. Melodic harmonies draw the listener in with the powerful vocals.

‘Endings’ is a riff fuelled track that has a thunderous sound from the outset with the drums echoing the heaviness of the track. Creating a huge sound from just the two of them, the vocals match the tone of the song, sometimes gritty sounding in places before they rise over the heavy rhythm in the chorus. ‘Solace’ is a darker sounding track and a slightly slower pace ends the EP with strong harmonies over a melodic guitar. The rhythm is still prevalent with a deeper riff coursing through the track and finishes on a heavy riff before the final guitar notes end the song. All of the tracks on the debut EP are full of immense sounding songs from TIDALWAVE and it is exciting to hear, especially when you come across a band that is just starting out.

TIDALWAVE have released an epic sounding first EP and this is a band that is going to go on to much greater things in 2015, especially when rock sounds this good from the very first note.