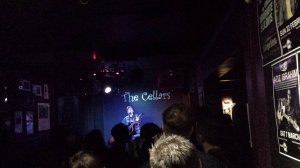 The Cellars in Portsmouth played host to what has become an annual event of Mark Morriss and Friends, with three excellent acoustic performances to lift the spirits of anyone feeling those post-Christmas blues.

Opening the evening was Clym Arnold who also helped out in organizing this great evening of live music in an intimate venue. Straight into the set with a gentle acoustic sound, raspy and melodic vocals filled the venue. The songs ranged from haunting to more upbeat songs, with powerful vocals soaring through many of the songs. With a gentle beat accompanying a couple of the songs, the range of styles was excellent to hear and ending the set with an almost breathing beat, the final song of the night was a foot stomper of a song and was a great end to the performance from him tonight.

Andrew Foster took to the stage next and having produced a brilliant debut album this year, treated the crowd to many of his songs from it. Starting with ‘Personal Legend’ with its upbeat style, the acoustic guitar produced a myriad of music behind the catchy vocals. ‘Jekyll and Hyde’ and ‘Memory Maze’ with the soaring vocals were both songs that went down well with the crowd. ‘Eyes To The Sky’ was more delicate compared to some of the other songs played but stripped back this becomes a great song live, before ‘The Garden’ with its slightly psychedelic influence resounded through the venue. The catchy ‘Heartbeats’ continued this excellent set of music before ending on a Neil Young cover ‘Don’t Let It Bring You Down’. Always great to see live, Andrew Foster once again put on an excellent performance.

So with much anticipation it was the turn of Mark Morriss to entertain the crowd. And entertain he did, not just with his music but also the witty crowd interaction everyone has come to expect from this music legend. Contributing to his pension fund a little bit more, it was a sold out venue tonight and he didn’t disappoint. ‘It’s Hard To Be Good All The Time’ opened the set with the acoustic guitar and those great vocals that have been behind many catchy tunes sounding excellent, before ‘Bluetonic’, one of the Bluetones classic songs, got the crowd going and singing along. Almost 20 years on and everyone still knew all the words. Mentioning his latest album it was then on to ‘Consuela’ before returning to his first album to play ‘I’m Sick’. Telling the crowd that his new album may be one full of covers “for the profit” next it was ‘Rock And Roll Woman’ before playing that “real party tune if ever he had heard one” ‘Keep The Home Fires Burning’. However it was more classic Bluetones so it did nothing to dampen the spirits of the crowd.

‘Life without F(r)iction’ and ‘Duchess’ both sounded excellent with Mark being on top form tonight as ever before the crowd were treated to the festive part of the evening with a mini rendition of ‘Walking In The Air’ which was the one and only Christmas themed song the crowd were going to get (maybe not in such polite words) but the banter is sometimes almost as entertaining as the songs and the crowd love him for it. ‘Marblehead Johnson’ (about weather bombs, who knew they would be so prophetic), ‘This Is The Lie (And That’s The Truth)’ and ‘Bienvenido’ were all played brilliantly. Ending the set was the memorable ‘Sleazy Bed Track’ and reminded everyone there that Mark Morriss has been on top of his game for over two decades now and still sounds as epic as ever.

However the night was still not yet over and it was a special 2 song encore to round off what had been an excellent night of music. ‘Spacecadet’ was the final song of all things Mark Morriss related which sounded brilliant live as it always does, before Andrew Foster once again joined him on the stage to sing that “modern classic” ‘Stay Another Day’. Yes it was E17 that they were singing although the lyrics were definitely more fun ala Mark style. Even though most of the crowd would probably not want to admit that they recognised the song, with the great harmonies from Andrew and the various vocal styles from Mark ranging from angelic to gruff, it was a brilliant end to the entire set.

When an evening of live music is as entertaining as this, everyone there will be looking forward to more of the same next year.