The Underground Pilots, Little London, Tricorn, Foxer Live At The Edge Of The Wedge, Portsmouth 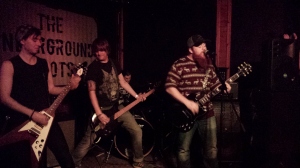 The Edge Of The Wedge, the slightly smaller and more intimate venue of the Wedgewood Rooms where you can see bands close up, was the scene of Breaking Bands featuring four of the best bands around at the moment on the local live scene. Hosted by Pilot Promotions who did a brilliant job of bringing together the line-up for the evening, it was 3 hours of rock at its finest.

First band of the evening were The Underground Pilots who took to the stage and immediately set the tone of the evening by opening with the riff-fuelled song ‘Buzzsaw’ with its heavy sounding rhythm from Tim, Tyrone , Ben and Mike and the vocals of Dudley coursing through the song. Following on with ‘Stoner Juice’ and ‘Murder Of The Dead Sea’ it was riff after riff of brilliant sounding rock with a heavy influence of stoner and grungy guitars. With the singer weaving in front of the crowd through the songs, The Underground Pilots played a storming set, finishing with ‘Gerbil’ and ‘Gnus’.

Little London took to the stage next and immediately launched into the fast paced ‘Love Reaction’ which blasted out from the speakers. Darren, Dev, Jamie and Kris put on a display of riff laden rock before Billy from Tricorn and another member of the audience jumped on the stage to help out with the vocals on the song. With a set packed with excellent songs such as ‘More Than I can Say’, ‘Blackouts’ and ‘Anyone Else’, the crowd also witnessed an additional slightly surreal antic of a leather jacket thrown at the band by someone in the crowd, but undeterred by this, the monster riffs, melodic vocals and tight rhythm continued through the rest of the excellent set ending with ‘Jacked And Coked’ and ‘Don’t Get Mad (I Don’t Remember Your Name)’.

Tricorn were on next with singer Billy bringing some light-hearted festive cheer to the night wearing a Christmas themed jumper but as soon as the opening riffs of the intro kicked in it was a onto a seriously epic set of riff drenched rock. The opening song ‘Give Me Some More’ from Billy, Constantine, Simon and Adam resonated across the room with the gravelly vocals soaring over a stoner influenced riff. With bass player Adam taking to the floor in front of the crowd, it was crunchy guitars through the songs ‘Falsify’ and the popular ‘Lady’, prompting a couple of females in the crowd to join the band on stage for this. Ending with ‘Therapist’ and ‘Such A Shame’ with both Adam and Constantine taking the floor on this one, it was a brilliant end to a set that had been full of monster sounding songs.

Foxer were the final band of the night to take to the stage and although they thanked people for staying to see them, there wasn’t one person in the room that wanted to miss out on the final set of the night. Opening with ‘Magnesium’ Chris, Roy, Sam and Jack were straight into melodic but heavy riff laden songs of rock, followed by ‘Go To Bed’ and the infectious sounding ‘Otherside’ with its catchy chorus and distinctive guitar riff. ‘Hole’ and ‘No Shame In Failure’ continued the set of great sounding vocals and harmonies with strong rhythm section backing up the songs. Not to be outdone, on the final song ‘The Great Brain Robbery’, bassist Sam managed not just to play in front of the crowd but mingled with them before laying his bass on the floor as the final notes of a remarkable set from Foxer ended, rounding off a night of rock that had been awesome from start to finish.

With a ticket for the evening costing less than an over-priced tax-dodging Starbucks Coffee and far better value in my opinion, it was an evening of rock at its most epic and hopefully there will be many more of these events in 2015, as you can’t ask for a better evening of live music.