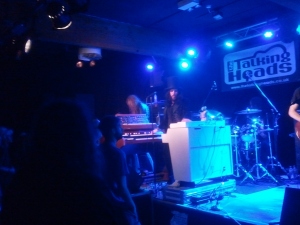 Bigelf started their UK tour at the Talking Heads in Southampton on 12th November which was a new city for the band and even the monsoon conditions before the start of the gig didn’t seem to dampen the enthusiasm of the crowd that turned up to see them.

Opening the evening was Jolly who are from New York City which the band may have mentioned a couple of times during their set. With a set full of riffs, impressive keyboards and a great sounding rhythm section backing melodic vocals, the band certainly put on an impressive performance. With songs such as ‘Joy’ and ‘Dust Nation Bleak’ sounding strong live, Jolly were certainly a great choice to start off the evening.

Canadian band Bend Sinister were the second support for the evening and with the bassist possibly trying to compete for the best hat award on the tour, their infectious sound definitely went down well with the crowd. Delicious keyboards at the fore, with a sleek bass and guitar sound, not to mention some of the most powerful drumming seen, the set comprised of some older songs along with newer songs from their album ‘Animals’ that was released earlier this year. ‘Thunder and Lightning’ and ‘Best Of You’ were definite highlights and once again Bend Sinister were another great choice.

Damon Fox took the stage resplendent in top hat and a long flowing coat and you knew you were in for a treat to see Bigelf live. Surrounded by an impressive amount of keyboards topped by a statue of Yoda and other stage gear that the band have managed to take with them all over Europe, this was a night of psychedelic prog rock at its best. I do confess I am a new fan of this band but having heard the excellent album ‘Into The Maelstrom’ Bigelf were every bit as brilliant live as their album. As Mike Portnoy was only on the European leg of the tour it was Damon Fox’s son that took up drumming duties on the UK part of the tour and did an excellent job.

Drawing on tracks from all their albums, the crowd were treated to songs such as ‘The Evils Of Rock & Roll’, ‘Madhatter’ and ‘Painkillers’ before newer songs ‘Hypersleep’ and ‘Alien Frequency’ drifted out across the venue. With such a mesmerising singer such as Damon Fox, all eyes were on the stage from the very start as the excellent songs were played one after another and the crowd were also treated to an impromptu new composition for a few bars. A ‘Money Machine’ mash up along with ‘ITM’ formed some of the songs in a truly compelling set, and with ‘Counting Sheep’ closing the set, Bigelf had been amazing to watch and it was a delighted crowd calling for more.

With an encore of ‘Incredible Time Machine’ and ‘Blackball’ which wrapped up an evening of progressive rock at its finest, the fans were certainly very grateful that Bigelf had decided to visit Southampton and I hope that they make a welcome return to the city the next time they decide to tour the UK.