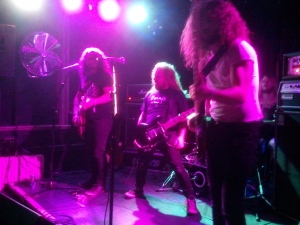 Australian rock band Massive have just completed a very successful UK and European tour that saw them perform 32 shows in just 6 weeks, with 15 UK dates supporting The Treatment before heading off to 13 European dates supporting Blackberry Smoke and a final 4 UK headline shows including Hard Rock Hell on the 2nd Stage.

Whether it has been a small intimate gig or in front of a packed house at sold out venues, Massive have been making a big impression on audiences across the continent with their addictive sound and every show has been one to entertain and delight the crowds with their style of balls to the wall rock. With favourites from their ‘Full Throttle’ album such as ‘Hollywood’, ‘One By One’, ‘Ghost’, ‘Now Or Never’, ‘Lacey’ and the most popular track live ‘Dancefloor’ on their support shows to additions of ‘Full Throttle’,’ If You Want Blood (You’ve Got It)’ and ‘Halo And The Gun’ along with ‘Burn The Sun’ and ‘Bring Down The City’ being played at least one of their shows, there wasn’t a moment at one of their gigs where it wasn’t brilliant to see them live.

With manager Rick and tour manager Mike having the unenviable job of keeping Brad, Ben, Aidan and Jarrod out of trouble and where they were supposed to be (and I have to say did a brilliant job in making it such an awesome tour), like any tour it wasn’t without the odd incident such as breaking down in Hollywood (Birmingham) and having to be towed to Wales along with a mammoth 27 hour drive through Europe from their final Blackberry Smoke gig in Stockholm to reach the UK after taking the more scenic route via Dover. But even a lack of sleep, a lack of clean clothes at times and some pretty intensive partying did nothing to dampen the enthusiasm of the band being over here on their first ever tour.

However this tour wasn’t just about it being gig after gig of awesome rock music with their electrifying performance every single time, every fan who had the chance to speak to them will all agree that Brad, Ben, Aidan and Jarrod are the loveliest guys anyone has had the pleasure to meet. With some new friendships formed, a fair number of female hearts set aflutter and offers of adoption, memories of time spent with the band on their first ever UK tour will remain with fans forever and many had travelled from all over the UK to see them on the final UK date in Oxford and to say their goodbyes.

Described as being like the start of a fiery affair and akin to something almost sexual (admittedly a few beers and Jägerbombs may have been consumed by this point), both the band and fans were equally complimentary on saying how awesome the tour has been and about each other. Seeing Massive play in smaller venues isn’t going to happen for long, many fans that saw them on this first tour will consider it to be very special to have had the opportunity to do so and the band are certainly going to be missed now the tour has ended over here. A big thanks has to go to Massive, Rick, Mike and all at Earache Records for making this one of the best tours ever.

For the band, although every part of the tour was awesome for them (apparently), there were a number of highlights including that awesome encore with Blackberry Smoke on the last night of their tour of ‘Highway To Hell’, a highlight for any fan as well that has watched the video, fans in Leeds singing ‘Ghost’ back to the band and the final Oxford gig where everyone ended the tour on the biggest high ever, although the tour seemed way too short and fans can’t wait until they return next year. Despite some discussion over this post gig in Oxford, I am going to quote Jarrod in his summing up of the tour that ‘its been fucking rad’.

Massive are now back home in Australia and have a few more gigs in December including a hometown show. They will be starting the recording of the highly anticipated second album early next year before more touring, with hopefully a number of festivals and another UK tour in the early summer of 2015.

Massive have certainly wowed the crowds in Europe in 2014. This is a band that is well on its way to global domination and it won’t be long until they are spoken in the same vein as AC/DC and Airbourne as being one of Australia’s greatest rock exports.