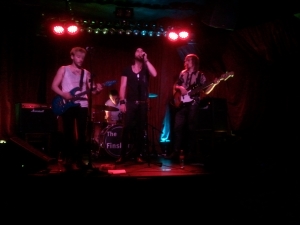 Just over a month since the Dirty Thrills released their brilliant self-titled debut album, tonight they played a headline set at The Finsbury in North London. In an intimate setting which had a nice touch of tables and candles it was a great venue to witness the band play live.

Louis James (Vocals), Jack Fawdry (Guitar), Aaron Plows (Bass), and Stevo Corrigan (Drums) walked onto the stage looking every bit a rock band tonight. Opening the set with a song from their first EP, Shiver with its gritty guitars, smooth bass, thumping drums and bluesy soaring vocals certainly sent shivers down the spine of the crowd that were there, from the very first note they captivated the room.

Next up was Reign, with drums pounding from the outset, guitars and bass combining into a wall of sound before the rapid vocals so easily delivered at a breath-taking pace, showed just how polished the band sound live, and with an animated guitar solo, it was mesmerising to watch. Rock and Roll followed and this is exactly what the band were tonight only 3 songs into the set, the bass thundering through the song. With the vocals off the scale throughout the song you couldn’t help but be impressed.

The Man Who Lost His Way is one of those catchy songs and the band certainly did it justice live tonight as some serious foot-tapping could be felt whilst this song was playing. Resume Regret was full of edgy riffs, especially during the guitar solo, lead and backing vocals sounding on top form.

Slowing things down it was then on to the song that has been recently featured on the Dermot O’Leary Radio 2 show. Is This Home really bought to the fore just how talented the band are, being able to strip back to a more gentle ballad before erupting into a crescendo of sound. Then it was onto the opening track of the album No Resolve, this song was blues rock at its very best.

Moving onto Follow Me Home, the powerful vocals, tight rhythm and dirty guitars sounding amazing live as this is a song that is just made for this, it needs to be played at full volume. Sigh was the final song of the night, starting more slowly before switching tempo to full on rock.

Dirty Thrills sounded every bit as brilliant live as they do on the album and they are definitely the band to go and see, not only for how they sound but for their brilliant stage presence, they definitely know how to put on a live performance that is going to leave you wanting to see them again and again.

The band are next playing another date in London on the 16th October at the AAA Bar in Kensington supporting US Band Flagship and this is definitely one live gig you need to go to if you weren’t at the venue tonight. Dirty Thrills are generating a lot of interest due to their unique sound and going on their performance tonight which was just electrifying, it is not going to be long before they are playing at far bigger venues.