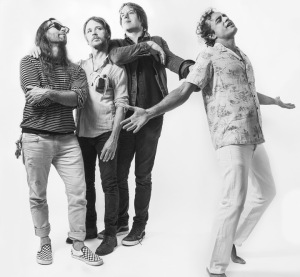 Seattle based rock band Joseph Giant have released their second album ‘Break It Together’.

The album is a personal scrapbook of events that Joe Syverson experienced over the past 5 years. During the recording of the album, Syverson and his family became homeless and had to find temporary place to live causing him to come up with the title ‘Break It Together’.

Putting everything he had in the making of the album pushed the process into a surge of creativity and urgency. With scrappier songs, like debut single ‘On The Run’ and acoustic songs like ‘Blink Of An Eye’, the album will draw you in!

Joseph Giant was formed in 2010 by Joe Syverson, and since then the band shared stages with some of the best bands in town and from around the country. Joseph Giant has played shows with War On Drugs, AA Bondy, Fruit Bats, The Moondoggies , Quiet Life, The Maldives, Jessica Hernandez and The Deltas & many more. The band released their debut self titled album in 2011, with their ‘Lucky Love’ EP released in 2014.

‘Break It Together’ is available as a digital download from their Bandcamp page.

‘Break It Together’ Tracklisting: