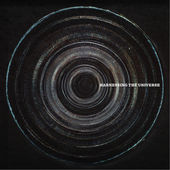 With a heavy influence of progressive rock, the band also have the core of a grungy rock vibe ebbing through the 10 track album. From the heavy rhythm of the opening song ‘Spirit Guides’, the rich texture of guitars form a solid base in which the dark and melodic vocals are unleashed over a powerful 7 minute opus. With many of the tracks hitting the 7 or 8 minute mark, there are intricate instrumental interludes and introductions, sometimes psychedelic in places on tracks such as ‘More Than Gold’ and ‘Magic Forest’ and many of the songs have an ethereal soundscape to them. A shorter instrumental ‘Catas’ notes a change of tempo, before a more stoner sounding ‘Ever Elusive’ pounds out a deep and heavy beat. A very grungy sounding title track ‘Harnessing The Universe’ swirls into a progressive undertone, before rounding off with ‘Orb’, that pulls together all the influences in the album into one final maelstrom of sound.

Combining many elements, ‘Harnessing The Universe’ engulfs the senses with both complex and simple arrangements that works really well.

Harnessing The Universe centres around the duo of Pat Koch and Travis Weibel, although a number of friends also helped out with the recording of the debut album.

The album is available from iTunes and Spotify.