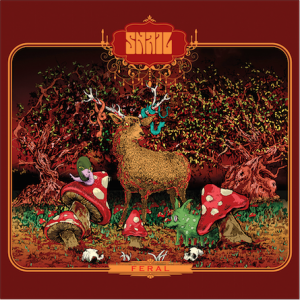 Seattle based psych metal forerunners SNAIL are making a great comeback with the release of their heavy, hazy and stirring fourth record ‘Feral’, via Small Stone Records.

SNAIL formed in 1992 in Los Angeles. The eponymous first album garnered much praise in the press, and gained a loyal following from peers, leading to the DIY, 4-track cassette-recorded ‘All Channels Are Open’ EP, after which SNAIL sadly succumbed to the “sex, drugs, and rock and roll” lifestyle and eroded to the point of breaking up.

After 15 years’ absence, SNAIL reunited in 2008 and unleashed ‘Blood’, which was among the highest-rated heavy rock records of 2009. The 2012 follow-up ‘Terminus’, showcased all fresh material, infused with the enthusiasm of newly-minted collaboration.

With the challenge of a “first new album” behind them, SNAIL set to work on ‘Feral’, their fourth full-length and first for Small Stone. Taking the varied approach of Terminus to new degrees of psychedelia and sonic heft, songs like ‘Smoke the Deathless’ and ‘Thou Art That’ epitomize the weighted melodic appeal of the band, while closer ‘Come Home’ steps forward in its brazen emotionalism.