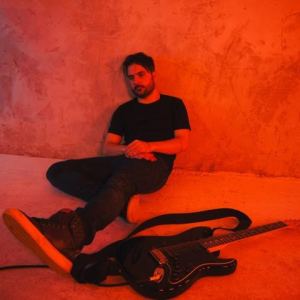 This storming track explodes into a frenzied guitar riff, as the heavy rhythm pounds through this epic crescendo of rock. With a catchy chorus that invades the senses, this is a powerful anthem of desire, confusion and has captured a scenario we have all been in, leaving ‘Hazy’ to be a song you don’t want to let go of.

Julian says: “Hazy is the about a girl that inhabits both my dreams and my nightmares. I can never be sure who she is and what she wants to do with me, but I can’t help to be incredibly attracted to her. It’s a song about raw instinctive feelings, love and hate.”

Born in the 80s, raised in the 90s, destroyed in the 00s and reborn in the 10s. Julian Grimm has been a force of music for a long time.

In the beginning of this decade, Julian moved to London to try to achieve his full potential. Here he fronted fast punk rock bands and formed his own musical endeavour, called Snap Out, which had a good run in the UK scene playing in venues such as the O2 Academy, Monarch and others. Not only that, the band was also chosen as a wildcard to be part of Hard Rock Cafe’s Rising competition.

A new EP ‘Rebirth’ will follow later in the year.