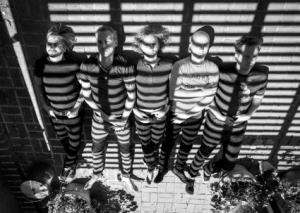 LA based progressive rock band Perfect Beings will be releasing their album ‘Perfect Beings II’ on 16 October via My Sonic Temple.

‘Perfect Beings II’ is a firestorm of emotion and raw energy. It combines progressive, experimental, classical, ambient, rock, jazz and pop into one unique style of music that carries Perfect Beings’ unmistakable signature. Their fans won’t be disappointed as the album is true to their roots while at the same time shaping the future of Prog Rock.

The internationally renowned rock band is expanding on its special brand of progressive rock and raising the bar to impress fans and critics alike. The new songs represent an indisputable evolution and a logical extension of the first album, but with extra confidence. ‘Perfect Beings II’ is a storm of emotion and raw energy that carries unmistakable signature. In support of their second independent release, the band successfully completed a crowdfunding campaign.

To give you an idea of the sound of Pefect Beings, check out their track ‘Helicopter’ taken from their debut self-titled album.