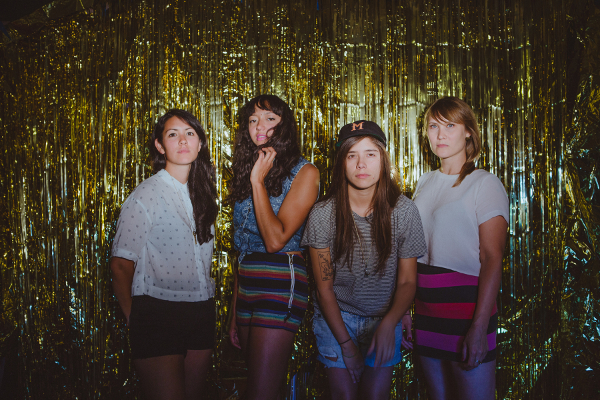 ‘Weirdo Shrine’, the hotly-anticipated second album from Seattle based La Luz, is out now.

Available via Hardly Art, the album was recorded earlier this year in San Dimas with producer/engineer Ty Segall. To mark the occasion, the band has shared a new animated music video for sort-of title track ‘Black Hole, Weirdo Shrine’.

For most, a brush with death would be cause for retreat, reflection, and reluctance, but Seattle band La Luz found something different in it: resilience. Having survived a high-speed highway collision shortly after releasing their 2013 debut LP ‘ It’s Alive’, La Luz, despite lasting trauma, returned to touring with a frequency and tirelessness that put their peers to shame. Over the past year-and-a-half of performing, the band arrived at a greater awareness of their music’s ability to whip eager crowds into a frenzy.

The resulting album is a natural evolution of the band’s self-styled “surf noir” sound—a rawer, turbo-charged sequel that charts themes of loneliness, infatuation, obsession and death across eleven tracks, from the opening credits siren song of ‘Sleep Till They Die’ to the widescreen, receding-skyline send-off of ‘Oranges’ and its bittersweet epilogue, ‘True Love Knows.’

Along with the new album La Luz will also be coming over to the UK for a tour in October: