The Lockhearts Release Video For ‘Low’ 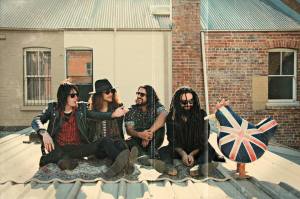 Australia’s ruffians The Lockhearts officially release their new video ‘Low’ utilising the skills of renowned fetish stylist Oliver Debiais and House of Fire’s couture bondage line to help bring their vision to life. The clip has already started to turn heads having just won bronze at the Global Music Awards before its official release. All we can say is wow, you need to listen to this!

Filmed at the now derelict Old Sydney Town, ‘Low’ is the first video off their newly released double EP ‘Tales from the Sea’; The Lockhearts engaged Award Winning Director Tanzeal Rahim to create this video following the success of his horror flick Muirhouse.

“The band wanted to appropriate Greek Mythology, with the clip to resemble the tale of the Sirens in Homers Odyssey” comments Rahim on the vison for the video. Sydney based burlesque models Noir Cult and Bette Von Bomme play the charming innocent maidens, transformed into dangerous martyrs.

“Despite the somber undertones, we had a lot of fun shooting the video… I think the girls had a little too much fun drowning us though” laughs Jameel, bass player for the Lockhearts.