The Hottest Record Of The Year? The Burning Crows Announce New Album Title 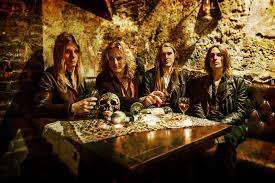 Norfolk based The Burning Crows have just announced their second album will be called ‘Murder At The Gin House’. Having released their excellent debut album ‘Behind The Veil’ in 2013, this is a much anticipated album from the band.

Their latest album was again funded via PledgeMusic and will be pre-released to those that have pledged on 24th April, with an official worldwide release date of 6th July.

The pledge, which stands at over 200% is still open, so a pre-order copy is available from their PledgeMusic page: http://www.pledgemusic.com/projects/theburningcrowsnewalbum2015

The Burning Crows will also be out on the road with their Behind The Veil Of The Damned UK tour in April with Falling Red. Details and ticket links are on their Facebook page.