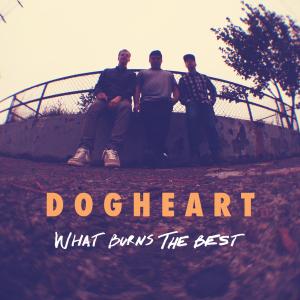 Portland band Dogheart have released their debut album ‘What Burns the Best’ on 17th February and is a 10 track album which incorporates a number of styles, but all the songs have a great rock sound to them.

Formed in 2014, Matt Jenkins (Vocals/Guitar), Gray Hildreth (Bass) and Cameron Hering (Drums) recorded the album in just under a week and this lends to the vibrancy the album has, capturing the energy of a live sound from the band.

With the thumping beats opening the first track on ‘Night Jewels’ before the catchy hooks and vocals come into the song, the album has a strong start to it. Tracks ‘Jawbone’, ‘Sound Machine’ and ‘Underwater’ all have a garage/alternative sound to them, whilst the incredibly infectious ‘Pumpkin Face’ has a dirtier tone to to it, with a grooving rhythm and a massive sounding chorus. With the more retro sounds on ‘Lose Me’ and ‘Diamond Tooth’ both of which have an upbeat sound over impressive sounding guitars and great harmonies, ‘What Burns the Best’ is an excellent first album from the band. All the tracks on the album offer something different on each song to make this a collection that captures your attention from the start.

Dogheart themselves describe the album as “‘What Burns the Best’ came out to be a balanced, 30-minute glimpse into stripped down rock ‘n roll” and you would be hard pushed to argue with that.

The website for the band is www. dogheartband.com They are on Facebook http://www.facebook.com/dogheartband and Twitter @DogheartBand
The album is available from their bandcamp page http://dogheartband.bandcamp.com/album/what-burns-the-best and is also on Spotify.

‘What Burns the Best’ Track Listing: