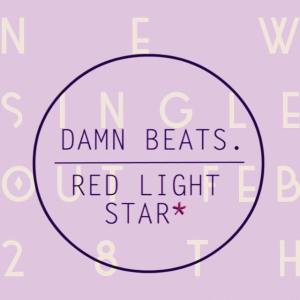 Members Lee Coneley, Harriet Terrill and Hannah Wheatley formed the band in 2014 and since then have appeared at Victorious Festival alongside Dan Le Sac vs Scroobius Pip, Festibelly, as well as recent support slots with The Weeks/Apache Relay, Fickle Friends and Signals, gaining a significant following as a result of their live performances.

‘Red Light Star’ is very much in keeping with their indie sound, with delicate sounding guitars as well as great harmonies on the track, and has an upbeat and catchy sound to it.

Damn Beats will be also be playing a live date at the Club Sandwich event on Saturday 28th February at The Clarence Tavern in Gosport, to coincide with the launch of the single.

Tickets for the event at Club Sandwich are available from the Music Glue website: https://www.musicglue.com/club-sandwich/events/28-feb-15-fickle-friends–the-clarence-tavern-/

The band have also announced they will be appearing at the Le Tribe Launch Night on 7th March at The Sanctuary in Basingstoke.