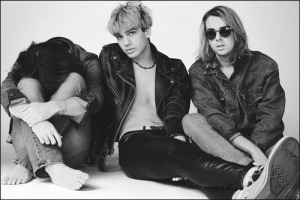 Band members Nathan, Taco and Cool, formed Heyrocco a few years ago and since then have been touring and bumming around perfecting their self-proclaimed genre ‘Disney Grunge’. Several years in the making, their debut record ‘Teenage Movie Soundtrack’ is due out early 2015 via Vital Music Group (UK)/Old Flame Records (US).

‘Elsewhere’ is an upbeat song that has influences of punk along with slightly heavier tinge of rock and grunge, that gives a great introduction to how the much anticipated album is going to sound.

Heyrocco will also be playing 3 live dates in March:

The band are on Facebook http://www.facebook.com/Heyrocco, Twitter @whoisheyrocco and Tumblr http://heyrocco.tumblr.com/
The single is available to buy on iTunes https://itunes.apple.com/us/album/elsewhere-single/id958133606