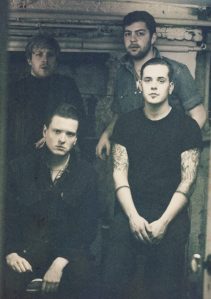 Southampton based 4 piece Spynes have gained a reputation for putting on energetic live shows over the last year with appearances at Southsea Fest and Oxjam, as well as support slots with Baby Strange, Fever, and most recently Dolomite Minor in Southampton, where the band played an excellent set.

Band members Scott Miles (Guitar/Vocals), Sam Egan (Guitar/Vocals), Sam Jolly (Bass Guitar/Vocals) and Christian Astridge (Drums) bring with them a fresh and exciting sound that has a number of influences. Full of crashing guitars, there are nods to rock, indie and even a little bit of punk thrown into the mix which gives Spynes an instantly memorable sound. Thrown in a bit of alternative as well and this is a band that has a lush sound to their songs.

Releasing their debut single ‘I Want You’ in November, this has already been played by BBC Introducing within weeks of it being released. The single itself it a myriad of sounds, as the drums pulsate through the track before the guitars melodically play out through the song. The edgy vocals start off in a slightly dark undertone before rising through the chorus and it is definitely one of those songs that grabs the attention from the very first listen.

With a rise in popularity once again for guitar-driven music, Spynes have an excellent sound that will gain a lot of interest in the band. Having only just released their debut single a few months ago, the band certainly will go on to bigger things in 2015.

Very much a live band as well, Spynes have a number of dates already announced for this year:

Spynes are hoping to release a follow up single to ‘I Want You’ in the summer and no doubt there will be more live dates planned in the future, so give the band a follow on social media to keep up to date.

Spynes are on Facebook http://www.facebook.com/spynesband and Twitter @SPYNESBAND
You can hear their debut single on Soundcloud and on Spotify.