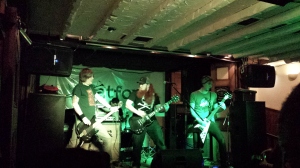 Portsmouth hosted its first ever winter one day festival Icebreaker which saw over 70 bands play 6 venues, all within easy reach of each other. Hosted by Pilot Promotions who have an excellent reputation for putting on some of the best live shows in Portsmouth, it was held at some of the top live venues – The Wedgewood Rooms, The Edge Of The Wedge, The Atrium, The Fat Fox, The Deco and The Honest Politician.

Bringing together a strong line up at every venue, there was a choice for every style of music (although sometimes too much choice as there were clashes which were impossible to avoid), the whole day was perfectly organised and it was a pleasure to move around the venues to see bands. The teams behind all of it worked really hard to make it a resounding success and everything was well-planned to make it as easy as possible to enjoy the festival, including an official guide with all the line-up details. As one day festivals go, you would be hard pushed to find a better event to attend, especially in winter and it was an excellent day of live music. A big thanks has to go to everyone involved in it for making it one of the best events ever to be held in Portsmouth.

With over 70 bands to choose from it took some serious planning and as most of the heavier sounding bands were playing The Deco, it was where RARC was camped out for a lot of the time.

The Bleechers started off the day of brilliant live music in The Deco with a bang. With a mixture of styles that sometimes sounded slightly indie as well as a heavier sound of rock and punk, this was a set full of contrasts that was a great opener to the day. With raw vocals and crunchy guitars, there were times when there was a groove to the bass line as the songs progressed. With great vocals along with harmonious backing vocals from their drummer at times, although the songs had a definite edge to them, they were also full of melodies. Being the opening set is always a bit of a tough one but The Bleechers proved that as a band, they have a great sound to them.

Brighton based Sweet Ether turned up the heaviness a notch with their energetic set. With a dirty sound to the guitars with some additional fuzz, the band combined a number of elements from heavy rock to slight undertones of grunge as well briefly touching on some metalcore to bring with them a very entertaining set. As the singer moved across the stage, there was a delicious heaviness to the guitars and rhythm, and the vocals sounded great even in a smaller venue. Sometimes sounding a bit dark, this was a band that had a massive sound to them. It may have been early in the afternoon when they played but Sweet Ether gave it their all and it was a very enjoyable set from them.

Gravel Rash are a band that doesn’t just play great music, this is a band that also always puts on a hugely entertaining set at the same time. They also like to involve the crowd and so it was hand-clapping from the outset before that brilliant heavy guitar led vibe kicked in. With powerful gravelly vocals, the bass grooved its way through each track as the dual guitars produced a brilliant sound to all of their songs. 2 songs in and already it was a boisterous audience that was enjoying what the band had to offer. Getting the crowd to join in with the singing on ‘Sail’, their set was a mixture of rock with some elements of a stoner based groove to some of the songs. The final song also featured the well-timed shouts from their guitarist and some synchronised moves on the stage along with 2 from the crowd also joining in at one point to round off an excellent set. As ever Gravel Rash had also brought with them plenty of riffs.

Dead Town Nothing, The Deco

Dead Town Nothing looked well dressed for an afternoon slot by wearing some nice white shirts and not looking that rock but it was a truly heavy sound that kicked off the set from the band the very first second of them playing. One of the heavier bands of the day so far, it was a metalcore sound from them with masses of grinding guitars over growling vocals that reverberated through the venue. Full of fast paced tracks, some of them being played at an almost frenetic pace, there was harshness to the sound from this band which was in your face from start to finish, as well as being full of energy and with a dark edge to them at times. Joking that they were pleased to see that they hadn’t managed to clear the venue with their set, this was a powerful performance from Dead Town Nothing that had all the right elements to make it a great set from them.

Showing a contrast of styles that The Deco had put on with their line-up, Zenthetix brought with them a more melodic style of rock. With a touch of metal, some retro sounding rock and some alternative, all their tracks had a great guitar sound and with powerful vocals that soared over the riffs. With the singer impressively climbing on to a post in the 2nd song and not managing to fall off, this was another excellent set. Some of the songs had a very catchy beat to them but at the same time were full of a heavy sound which made the songs instantly likeable from the outset. Not wishing to be out-done, the guitarist also got up higher during one song and gave an energetic performance despite almost touching the ceiling. Ending their set with more of those brilliant sounding heavy guitars, Zenthetix definitely put on a memorable performance.

3 piece Old Sarum are a band that has that brilliant sometimes southern , sometimes a little bit of a stoner tinge to their songs but above all the come with a generous helping of rock. With a delectable heavy rhythm to their sound over soaring guitars, the band have tracks that you just want to stomp along to. Great sounding vocals rise and fall through each song and there is a massive sounding bass line to all of their tracks. The crowd were dancing along to many of the songs throughout there set, there were plenty of moments where the tracks had monster sounding riffs. Mike Hartley from The Underground Pilots guested on drums for one of their tracks, and this brought with it an even heavier feel to that song, before it was back to the band on the final track which was guitar-drenched and high-octane, bringing to a close a brilliant set from Old Sarum.

Morass Of Molasses, The Deco

3 piece Morass Of Molasses don’t do anything but heavy. With the rare use of a baritone guitar, this is a band that has a rich sound to their guitars that is a delight to hear. Plus if there had been an award to see who had the best beard of the day, their lead singer would have trashed the competition. Both of the guitars were full of an epic filthy sound, that was almost sludgy in places and deliciously loud, and along with the thumping drums this was a great accompaniment to the raw and powerful vocals. It was heavy, it was loud, and in a small venue, the sound from the band was immense. With the singer at one point asking if people liked women, there was a murmur from the crowd, however asking if people liked naked women brought with it a much more raucous response before the band once again launched into another great track of heaviness. In true rock and roll style, during the final song the singer stood on the amp, before Morass of Molasses ended an excellent performance with more of the great guitar sound the band do so well.

Portsmouth favourites Tricorn have played many venues, but the band seems almost at home in The Fat Fox and clearly like to play there. Full of those great dirty sounding stoner riffs from the outset, with a heavy rhythm along with vocals that grind their way through each track, it was a set full of powerful songs that also had a bit of a sludgy edge to them. With the venue almost packed out, the band put in an energetic performance as well, with the bass player giving it his all and the hat even falling off the singer at one point. Playing a set full of songs which were very much favourites with the crowd, it was fast paced and frenetic at times along with contrasting slower songs, but all of them were full of a guitar-driven tempo to every single one of the songs they played. Such was the power from the heavy guitars which sounded absolutely monstrous in the venue, it was literally glass-shattering during their track ‘Therapist’ as the heavy vibrations moved a glass off a shelf through sound alone. That is the way to play live music. Ending their set with more of those brilliant heavy based riffs that Tricorn are the masters off, this had been an epic performance from the band.