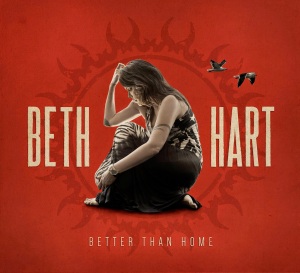 Grammy Award-nominated blues-rocker Beth Hart is set to release her new studio album entitled ‘Better Than Home’ on 13th April 2015, which will be released via the Mascot Label Group.

For more than 2 decades Beth Hart has been stunning audiences with her unique sounding vocals and this will be her most profound album to date. ‘Better Than Home’ is a collection of songs that touches on her personal pain but also transforms them into something empowering and insightful.

The new album is full of powerful songs including ‘Mechanical Heart’ which is dedicated to her husband, to the more upbeat ‘You Might As Well Smile’ which is reminder to not take things too seriously and the album promises to be more of those haunting but powerful vocals that are compelling to listen to.

The album can be pre-ordered from the Mascot Label via the link http://www.mascotlabelgroup.com/home.php as well as other bundle items to go with the album release.

Watch the ‘Better Than Home’ Album trailer to hear a taster of what the album has to offer.

You can see Beth Hart on her European Tour starting in April:

Might As Well Smile
Tell ‘Em To Hold On
Tell Her You Belong To Me
Trouble
Better Than Home
St. Teresa
We’re Still Living In The City
The Mood That I’m In
Mechanical Heart
As Long As I Have A Song
Mama This One’s For You (bonus)*

* Only available on deluxe limited edition CD and vinyl