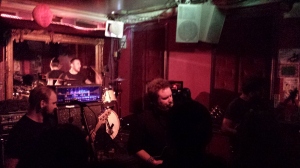 The Trinity Bar in Harrow played host to its Back To The Trinity night with three excellent bands in the line-up and all for less than the price of a pint.

First band of the evening were Guns Of Anarchy who looked like rock stars in the making as they took to the stage. Launching into ‘Hang ‘Em High’ the heavy riffs bounced off the walls and as soon as the melodic vocals started you knew you were in for a great set of rock. ‘She’s Gone To The Dogs’ and ‘Ain’t Gonna Change’ were fine examples of just how to do a rock song and with a heavy sounding rhythm and great backing vocals, they sounded huge in the intimate venue. Songs such as ‘On The Attack’ and new song ‘Cashing Cheques’ gave a glimpse that this is a band that has a great future ahead of them, especially with the soaring and powerful vocals and every song sounded great live. Getting the crowd to join in on ‘Off The Rails’, the set then ended with ‘Fortune And Glory’. Singer Todd did mention that he perhaps wasn’t on top form tonight but with a brilliant set everyone there would have to disagree.

Meansteed were the next band to take to the floor and despite singer and guitarist Matty being unwell with flu, they put on an excellent set with their hard-hitting rock. Starting off with ‘Rolling Thunder’ it was full of riffs with the rhythm and drums pounding the venue. Melodic vocals and harmonious backing vocals instantly got the crowd going before the band carried on with their song dedicated to dancing ‘Booger Sugar Boogie’ which upped the paced even more. The anthemic ‘Engage The Rage’ was next which was a monster of a song full of riffs and powerful vocals. Mid song singer Matty hoisted guitarist Alison onto his shoulders and deposited her onto the bar, whilst she still played guitar. She proceeded to walk along the bar, jump down, pull a pint of beer and carry it back to the stage without spilling a drop all whilst still playing the riffs of the song, making Joel from Airbourne who also does a similar gig antic look positively tame in comparison. It may have been hard to top that but Meansteed continued to please the crowd with full on rock songs such as ‘Stand And Deliver’ and ‘Idiot Without A Cause’. With a final song of ‘Two Good Fists And A Death Wish’ finishing a set that had been both entertaining and full of epic rock, Meansteed are definitely a band to see live. Full of energy and with excellent sounding rock, it was most definitely an exciting set to watch.

So it was down to headliners Ten Ton Tabby to round of the night that had already been full of excellent rock. The crowd certainly took being up close to the band to a whole new level with barely an inch of space in front of the band as they crowded round them. Straight into ‘Nine To 5’ it was a riff-fuelled extravaganza of rock that Ten Ton Tabby excel at. With the vocals sounding every bit excellent live as their recorded material, the crowd loved the heavy sound from the very first note. The heavy riffs in the venue sounded massive as they continued the set with ‘Addictions’ and ‘Ride’. With the extended riffs sounding dirty, grungy, addictive even, every song was a huge hit with the crowd. With the vocals of Tom sounding superb and with great harmonies as well as a thunderous sounding rhythm section, every song was testament to the fact the band know how to rock.

Thanking everyone for coming to see them tonight a number of times, they seemed genuinely surprised so many had been there to see them but this is Ten Ton Tabby, a band who had one of the best EP’s of the year. More riffs, more excellent vocals, they continued with ‘Ride’ and ‘Low Light’, every song resonating around the venue in an epic way before delighting the crowd even more with ‘Rocky’ and the hugely popular ‘Stone By Stone’ to cheers from those that were there, it was an electrifying set. Dedicating a song to a friend who was celebrating their birthday (who had my sympathy for being one of those unfortunate souls to have a birthday so close to Christmas) the next song ‘Nib’ was more of that riff-drenched rock Ten Ton Tabby are the masters off before ending what had been an awesome set with ‘Breadfan’, rounding off a night that had seen some of the best live music in one evening.