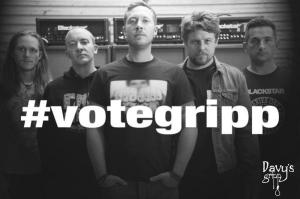 Chichester based rock band Davy’s Gripp have been nominated for December Band Of The Month by the prestigious Firebrand Rock Radio and Magazine. With Firebrand being at the forefront of rock music and having been instrumental in promoting bands who deserve the attention of a much wider audience, along with regular reviews and interviews with more established bands such as Glenn Hughes and Halestorm, to even be nominated when there are so many bands out there trying to get heard, is testament to how brilliant Davy’s Gripp sound.

However the band who show endless dedication to making sure their talent is heard, are now on a mission to win the competition and so are asking fans of the band and anyone else who may have heard them to give them a vote on the Firebrand website.

Competition is fierce as they feature alongside five other bands and with a prize up for grabs that includes a special one hour show and interview on air, guaranteed airplay for one month minimum of three plays per day, a copy of the pre-recorded interview for the bands promotion purposes, and the interview printed in the monthly ‘Firebrand’ Magazine, every vote counts.

So if you would like to support them and help to ensure the band win the competition you can click on the link here and cast your vote for Davy’s Gripp until midnight (UK time) 31st December 2014, helping the band to have a great start to 2015.