Lucks Lane Tell The Story Of Our Lives 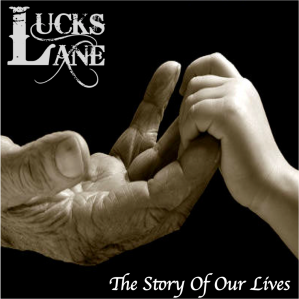 Lucks Lane who released their debut album ‘a new someone’ in 2012 are about to release their second album ‘The Story Of Our Lives’ on 21st November. Already known for their distinctive melodic rock sound, their latest album is rich in soaring guitar riffs and a sleek rhythm section behind powerful rock vocals.

Based in Peterborough, Steve Cairney (Vocals), Steve Potter (Lead Guitar), Joe ‘Kenny’ Daglish (Rhythm Guitar, Vocals), Dan Stimpson (Bass), Pete King (Drums) along with the exceptional songwriting skills of Pete Moore, have produced an 11 track album which features all the great elements from their debut album and has taken their music to another higher level of excellence.

Starting off with a killer opening track ‘Ignite The Fuse’ doesn’t just simmer, it explodes into gritty guitars, thunderous drums and a rapid delivery of vocals. With its blistering guitar solo mid-song this track certainly starts the album with a bang. ‘New World Revolution’ with its catchy beat and slight retro sound keeps up the pace of the album before launching in to ‘The Truth Behind The Lies’ with a groove-led bass riff pulsating through the track behind melodic vocals. ‘Running For My Life’ has more of that classic rock sound that Lucks Lane excel at with another delicious guitar solo and an infectious chorus. ‘Turn The Tide’ has a heavier guitar riff from the outset, both lead and rhythm guitars coming to the fore on this track.

Title track ‘The Story Of Our Lives’ starts with a sample before the vocals soar over a crescendo of sound from the band. ‘Waiting For So Long’ again has a gritty guitar riff with a very melodic and catchy chorus whilst ‘The Air I Breathe’ has a gentle intro before opening into heavier riffs and a soaring guitar solo, which again is heard through ‘What Remains of Us’ where the vocals are over-laced with an almost mournful guitar driven riff.

There are two slower tracks on the album, ‘A Million Hours’ which is a softer sounding song, with raw yet powerful vocals that all combine to produce a more delicate tone and a final track ‘A Different Place’ slows the pace of the album and a stripped back melodic ballad resonates until the last note is played.

Those already familiar with Lucks Lane are going to be delighted with ‘The Story Of Our Lives’ and it is definitely one of those albums that is going to gain a lot of attention from those who have yet to hear them when it is released, due to it being such a brilliantly crafted album.

The Story Of Our Lives Track Listing:

The website for the band is http://www.luckslane.com. The can be found on Facebook https://www.facebook.com/pages/Lucks-Lane and Twitter @LucksLaneBand. They can be heard at ReverbNation http://www.reverbnation.com/luckslane, SoundCloud https://soundcloud.com/lucks-lane and Spotify. The album will be initially available in a download format on Amazon MP3 and iTunes from Monday 21st November 2014 and any pre-orders from both sites includes 4 tracks that are available to download immediately before the official release date of the album.

Album, Lucks Lane, Rock, The Story Of Our Lives