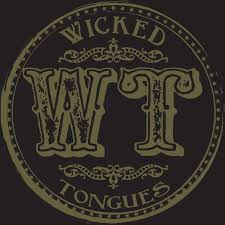 With so much great music out there it is sometimes difficult to find every great band and much deserved bands don’t always get the recognition they should. This can be especially true for bands across the pond that don’t always get heard over here in the UK. So it was with great delight that I crossed paths with a band called Wicked Tongues who hail from San Diego, California.

Mason Betsch (Vocals), Michael Conway (Guitar), Ryan Shaw (Bass) and Elias Berlinger (Drums) have produced a dirty rock blues tinged sound, full of delicious riffs with a grainy bass and pulsating drums, backing soaring and melodic vocals, to say I was excited when I first heard them was a bit of an understatement, this to me was exactly what I love when I hear a rock band.

Wicked Tongues released their debut self-titled 4 track EP in 2013 and it just grabs your attention from the start. The first track Chadderone (Up The River) starts with monster drums before edgy guitar riffs and a grooving bass line join in. As soon as you hear the blues vocals it becomes an instant favourite. Karma, Killer, Savior, Sinner really shows just how brilliant the vocals are with an addictive riff, the guitars sounding gritty throughout the song. The Artist is a slower blues track, the delicate sound the band produce is almost seductive sounding and certainly shows how talented the band are. Pariahs starts with a southern sound, softly starting with an acoustic vibe before the band all come into the track to rock their way through the final track. For a debut EP the song writing skills are really apparent in the 4 tracks and Wicked Tongues have everything that you would want from rock music.

Wicked Tongues have now released a second EP entitled Jackals in August and this features 3 tracks of the same brilliant sound from this band. Electric which is the single from the EP starts with a monster sound, it has it all, thumping drums, edgy guitar riffs, addictive bass and off the scale rock vocals that send shivers down the spine. One listen to this song and I defy you not to like it, you may even become a little obsessed like I was. Jackals keeps up the pace with the guitars sounding epic from the start whilst the vocals are gravelly and melodic. The drums also come across really well, providing a catchy beat behind all the other great riffs on this track. The final track Wild Sadie opens with a melodic guitar solo before those hypnotic vocals rise above it, as the band then crash into the track with a dirty grooving sound. Recorded in analog, the whole sound of this EP takes you back to that classic dirty blues rock sound that is sometimes lost in more modern records.

Wicked Tongues have produced two excellent EP’s and I am certainly glad that I didn’t miss out on this little gem of a band. This is how I want my rock to sound, I hope to hear a lot more of them as they are the future of rock and definitely a band to watch out for.

The website of Wicked Tongues is http://www.wickedtonguesband.com. Their latest EP can be found on Bandcamp http://wickedtongues.bandcamp.com/ and you can also hear their debut EP on Spotify, which can also be downloaded from Amazon, and are on ReverbNation http://www.reverbnation.com/wickedtongues.  They are also on Facebook http://www.facebook.com/WickedTongues and on Twitter @Wicked_Tongues so go check them out, have a listen and then give them a follow as you are going to want to hear a whole lot more of this band.