Sell Your Soul To The Devilstrip 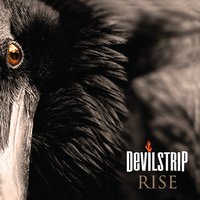 I like American rock bands, a lot of my albums over the years have been imported from the US when they haven’t been available over here in the UK, especially when the band hasn’t always had the exposure they deserve outside of the States.

One such band I came across via Twitter was a 3 piece rock band from Akron, Ohio by the name of Devilstrip. A listen on RevebNation to the track Go from their debut album Rise which was released 1st August, confirmed that Devilstrip were just my kind of band. Formed in 2013 Marc Wasmund (Vocals, guitar) Graig Lindgren (Bass) Jimmy Gray (Drums) have been steadily gaining support with a number of shows and have also joined Buckcherry on tour in the last year.

Rise is ten tracks of that great American rock sound. Edgy riffs that deliver a powerful sound from the outset starting the album with Not What You Need which shows you this band means business from the start. Go is next which is just a powerful anthem of rock, everything about this song soon gets you hooked. Including Me is full of pounding drums, big riffs thumping along to the rock vocals then it’s onto Are You Ready which is a powerful yet melodic rock song, only four tracks in and you are certainly ready for more of Devilstrip. Kill the Headlights (Roll) is a track of pure heavy rock carrying on through To the Enemy with its epic guitar sound.

Ugly is certainly no filler for the album with the whole sound of the band encompassing that rock vibe that is far more favoured over in the US, before Light Up The Room lightens up the rock a little bit by showing a slightly more softer side to the band. Love, Hate, Die is a touch more southern rock sounding, here the great vocals dominate the track before the final song She Said, in which the band deliver a reminder they are here to give it everything they have to round off their brilliant debut album.

If you like rock, if you like your rock to be heavy yet melodic and love that American sound then Devilstrip are certainly the band for you and Rise is certainly the album to get. It is a great debut album and hopefully more people will get to know just how good this band sound now it has been released.

Devilstrip have also just teamed up with MAXIMUM VOLUME PR here in the UK who are as passionate about music as I am, certainly know how to make things happen and are helping to promote the band in UK/Europe so it won’t be long until Devilstrip are much more well known outside of the US and very much deservedly so.

To find out more about MAXIMUM VOLUME PR their website is http://maximumvolumepr.com/