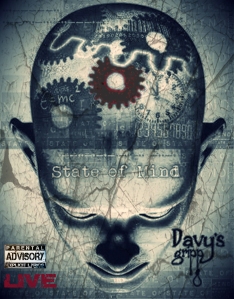 I love to discover new bands and nothing beats the excitement of hearing a band that instantly grabs your attention. Recently a follow on twitter led me to discover a band called Davy’s Gripp who not only sound great but are also a local band to me. Supporting slots with Toseland and The VirginMary’s plus playing at the 02 Academy in Islington recently, the band are making a mark in the world of rock music.

The band’s EP Wicked Game has 3 massive rock tracks Wicked Game, Immortal Love and One Lung Rose with the addition of a bonus DVD so you don’t just hear how great the band sounds but also see them perform Immortal Love in a place that I recognise in the local area. As soon as the first track starts you are amazed at just how good the songs are, a dirty rock sound from the guitars and bass along with a drum beat that shows these guys love to rock. As soon as the vocals start the sound just blows you away. A bit bluesy, melodic and a lot of rock the EP showcases just how seriously good Davy’s Gripp are.

As the EP just isn’t enough once you get hooked on the Davy’s Gripp sound there is also a 9 track album State of Mind. It’s billed as a ‘Live’ album but it sounds so good that a studio album from this band would definitely be a musical eargasm and the album to have in any rock collection. However if you don’t have the EP and album currently available then I have to say your record collection is very much lacking in musical greatness and this is something that needs to be amended now.

The album starts with the track Infected and you certainly are as soon as you hear the riffs, one of the best opening songs to an album I have heard in a long time, thumping drums, gritty guitars and a powerful vocal from the outset. This leads into the title track State of Mind, the slow soulful start opens up into a melodic sound that soon becomes a firm favourite with a vocal delivery that screams rock, the guitars, bass and drums just sounding epic. Shotgun comes next and straight into that Davy’s Gripp sound as you discover this band both lyrically and musically has so much going for them that you wonder how you have lived without their music before this. The fourth track Wicked Game is dirty rock at its very best, a catchy bass line, loud guitars, loud drums and a raw vocal, if you aren’t obsessed by the album by this point you need a lesson in what is rock. Immortal Love just slows the tempo down slightly but with a defined rhythm running through the entire track you get to hear how well this band sound when they play.

Next is Me, Myself and I and although the whole album is amazing this is probably my favourite track. I like songs to rock but there is just something about this track that grabs you, haunting guitars with the rest of the band gently building into the song, as soon as the powerful yet raw and emotional vocals start you know you are going to have to hit that repeat a lot more on this track, it is just one of those songs you instantly fall in love with. Following such a great track could be difficult but the band totally pull it off with One Lung Rose, straight back into pure rock it’s one of those songs that needs the volume turned up to 11. The eighth track Pressure keeps up the pace and if you like your guitar riffs then this is one for you as they really stand out on this track. Rounding off the album is Better Man, that big rock sound Davy’s Gripp excel at from the offset, the band give it their all and certainly leave their mark on anyone who listens to the album.

There is not a track on the album that doesn’t leave you breathless and wanting more, sometimes an album can feature a song where it isn’t as favoured but this is 9 tracks of pure musical excellence, it rocks from start to finish, it is everything a rock band should be and more. Powerful vocals, sounding incredibly tight musically this album is best played loud.

There is also an additional track on SoundCloud Overrated that has been featured on a recent sound track for a movie along with some extended live versions of their songs and their SoundCloud releases can also be found on the band website. Also on ReverbNation you can check out 4 of their songs and if that hasn’t given you enough places to hear the band then they are also on Facebook and Twitter so there are absolutely no excuses as to why you still haven’t heard them.

I’ve yet to have the pleasure of seeing them live but having heard the songs from them you just know they are going to rock any venue and I can’t wait to hear more from the band, I have definitely been ‘Gripped’ by them.