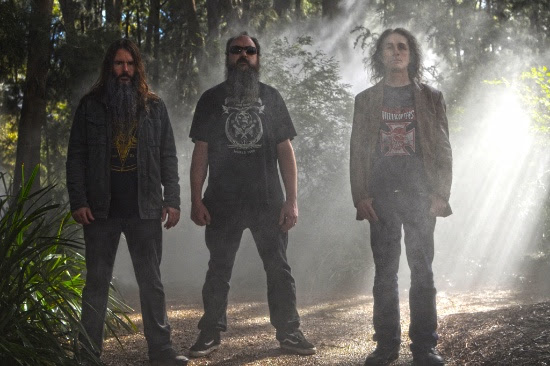 Decamping to Mebourne’s Goatsound Studios with producer/engineer Jason Fuller (Blood Duster) in January last year, the trio emerged with what quickly became one of 2015’s finest underground releases. A mélange of gnarled vocal tones, pummelling drums and outright guitar majesty that provided the perfect tomb for the dark lyrics contained within, the self-released ‘The Vast Electric Dark’ struck an instant chord with purveyors of heavy rock. Landing itself on the top spot of last November’s Doom Chart and scoring a prestigious slot on Metal Hammer’s Sons Of Sabbath compilation, it’s perhaps little surprise that the boutique label STB Records quickly came knocking.

Following the exclusive STB vinyl-only version of the album which sold out in record time, Ripple Music will give everyone the chance to find out what makes Witchskull so special when ‘The Vast Electric Dark’ is given an official worldwide release on CD and digital download on 23rd September 2016.

Borne out of a love for Dio, Black Sabbath, Motörhead and the NWOBHM movement the trio locked into an almost hermetic groove from the very beginning. So much so by the Summer of that same year Witchskull were road testing freshly demoed songs at countless shows across Canberra, Melbourne and Sydney. Capable of unleashing raw, balls-to-the-wall doom indebted in no small part to the influence of heavy blues-rock and proto-metal, their unmistakably primal sound marks them out as a stunning live spectacle… a force of nature awakening again and again, night after night.

The band will be playing live on 30th October 2016 at The Rage for Armageddon Fest – St Vitus Bar, New York .