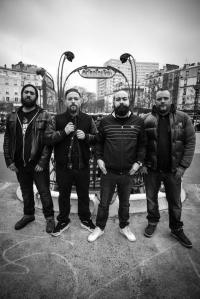 Paris based Hangman’s Chair are set to return with their fourth album ‘This Is Not Supposed To Be Positive’.

The band’s latest album sees them further impress with their heavy stoner sound, with mammoth touches of doom. Huge fuzzy riffs compliment the dark and brooding vocals, that will rip your face off from the outset, as you drown in a wall of sludge.

The album is set to be released on 6th of November 2015 via Code7/Plastic Head (UK), ClearSpot/Bertus (Benelux), Broken Silence (Germany).

Hangman’s Chair is a French sludge doom rock combo formed in 2005. Since then they have previously released 3 full length album and 2 split albums. They have also toured extensively, including Hellfest in France to Iceland, Russia, Benelux, Germany, Switzerland with Eyehategod, High On Fire, Crowbar, Corrections House, The Devil’s Blood, The Sword, Redemption 13.

‘This Is Not Supposed To Be Positive’ Tracklisting: