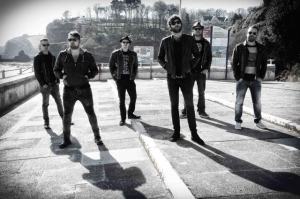 Token Joker have released their new single ‘Green’ and this is one song that doesn’t need to grow on you.

Devon doesn’t always spring to mind when thinking about rock bands, ok so there is Muse but the county tends to seem a little cut off from the rock scene, even big name bands can’t seem to find their way there on tour, so perhaps this is why there has been an emergence of excellent hard rock bands coming out from there recently. Token Joker is one of those bands.

Releasing their latest single ‘Green’, Token Joker have certainly mastered the monster riff sound. This stadium quality anthem has all the elements, the thunderous rhythm, the big vocal and a melody in the chorus that has you singing along after a couple of plays. It is easy to see why Matt Bellamy has leant his support to the band.
“Remember my name” is sung through the song, and with ‘Green’ this is an excellent track to make sure you remember the name of Token Joker as this is a band on the rise.

Token Joker formed in 2014 and have had support and exposure via national and international radio stations stretching from South Africa to N. America, including a live session for BBC Introducing Devon and plays of their previous single ‘Ride The Train’ on Planet Rock. Shows with the likes of The Tricks, The Others, and The Beaches, and their appearances at The Great Escape Festival in Brighton has only increased interest in the band . With the forthcoming release of their ‘Just Part of The System’ EP , Token Joker are one of the bands to watch out for as they explode onto the music scene.