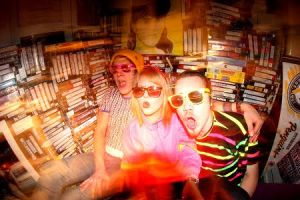 Possible one of the longest and some might say strangest named band, Finnish flower garage group Have You Ever Seen The Jane Fonda Aerobic VHS? have released their second single ‘Family Man’.

This is the second single to be taken from the bands debut album ‘Teenage Sweetheart’, which will be released on VILD Recordings on September 11th.

Their unconventional name, which shortens to HYESTJFAVHS?, instantly sets the tone for their playful, nostalgic sound. Inspired by a wide range of genres from rock’n’roll to 80’s dream pop and 60’s soul/girl groups, the trio’s twist of doo-wop and flower-punk attitude creates the perfect end-of-summer soundtrack: light-hearted but full of energy.

Aside from their interesting name, the Kouvola-based three-piece differ from any other garage rock group in their unconventional lack of a guitarist. Instead, the band uses retro Casio and Eco-organs to create lively melodies and distorted sound walls, making them one of the most entertaining and refreshing outfits on the current scene.