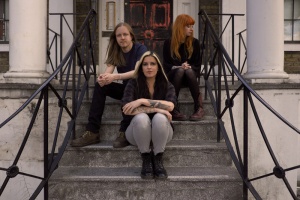 The song is taken from the trio’s forthcoming mini-album ‘Hummingbird’ which is set for release on 18th September. Masakichi have also announced that they’ll be playing a special release show at The Lexington in London on 23rd September.

Combining the expansiveness of post rock and shoegaze with fuzzed up indie rock structures and dance-orientated grooves, Masakichi was formed by guitarist Reuben Gotto who has spent the past few years travelling the world with bands such as Foals, Maccabees and Alt-J, immersing himself in the sonics and inspirations of a nomadic musical lifestyle and returning home with a mammoth catalogue of tracks recorded in hotel rooms, dressing rooms and on long haul flights. Finding kindred spirits vocalist Hannah Cartwright (Snow Ghosts) and bassist Hattie Williams (Telegraphs) in London, the trio began to fully form Reuben’s tracks into songs. Enlisting Reuben’s old band mate Ben Calvert (Killing Joke, Calvin Harris) on drums, the band laid down the six core songs that comprise ‘Hummingbird’ at the end of last year.

Masakichi is the name of a character from Reuben’s favourite Murakami book ‘After the Quake’. Masakichi was also an artist in the 1800’s who made a statue of himself for the woman he was in love with, finishing it with his own hair, finger nails and teeth. A great story of passion turning to insanity.