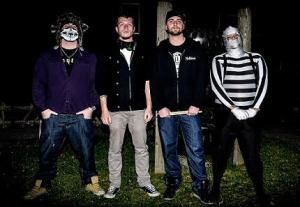 Meltdown have released a new single ‘I Won’t Be Submitted’, which is taken from their recently released album ‘Boobs Are For Heroes’.

The new album is currently available in CD format in local stores in Lausanne, Switzerland where the band are from, but Meltdown will be releasing further details in the near future about additional digital download, streaming and distribution options for the new album.

Founded in December 2011, Meltdown made its first path on stage a few months later and after some time working at rehearsals in order to built its own musical style, between rock, metal, and even funk, with humorous overtones . Comic-core was born and then the band unleashed a music video for its first single ‘Animals’ before recording their first EP ‘Learn to burn’ (2013).

Several gigs later in Switzerland or France, Meltdown embarked for a trip around Cuba for the Brutal Winter Fest (2014) and the same year appeared on the ‘Global domination’ compilation by Imperative Music (USA). 2015 sees their debut album release for ‘Boobs Are For Heroes’.