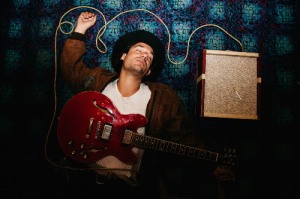 Still hot off the back of performances at Groovin’ the Moo and Big Pineapple Festivals, Timberwolf will take his explosive live show on the road this August in celebration of his 2015 EP release ‘Flux’.

With singles from the EP ‘It Burns’, ‘Fallen Sun’ and ‘Whiskey Jar’ all securing National radio airplay, and the EP receiving rave reviews from music media across the country, these shows are set to be Timberwolf’s most exciting headline appearances to date.

July will also be a busy month for Timberwolf as he undertakes his first tour of New Zealand playing 3 ‘stripped back’ sold out shows with Gin Wigmore in Auckland, Christchurch and Wellington, as well as the support slot on 2 of her Australian dates.

After spending time on lead guitar for friend and fellow Adelaide artist Jesse Davidson in London, Timberwolf has returned home with the first recording from what will be his forthcoming debut album. Recorded and co-produced in Tileyard studios by Jake Miller (Jesse Davidson, The Preatures), Chris says, “I don’t think I’ve ever been so excited about a recording, it’s definitely my most progressive piece yet. It really fits with where I’m at with my writing at the moment. It was nice to produce something that sounds a bit different. It’s definitely not what people will expect.”

Timberwolf has also announced signing with WAU Management, home to the likes of REMI, The Kite String Tangle, Violent Soho and Vance Joy. Overseeing management will be Aidan and Rhett McLaren who also manage REMI assisted by new UNIFIED recruit Joe Miles. The McLaren Brothers are the directors behind The Hills Are Alive festivals and joined artist-management forces with UNIFIED back in early 2014. Their union with UNIFIED also saw the birth of the hugely successful UNIFY Gathering which is set to return in early 2016.