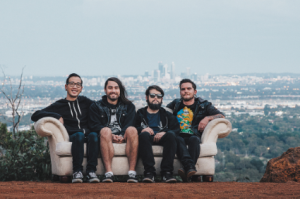 The Decline are set to release their 3rd album ‘Resister’ via Adelaide based Punk/Hardcore label Pee Records on Mon 3rd August 2015. It will also be released on Bird Attack (USA) and Cargo Records (Europe/UK).

Since the release of their debut album ‘I’m Not Gonna Lie to You’ in 2010, Australian Skate-Punk band, The Decline, have grown to be a recognisable name in the international punk community. The release of their sophomore album ‘Are You Going To Eat That’ in 2011, scored the band a headlining tour of Europe, a Japanese tour with Israeli pop-punkers Useless ID and So-Cal 90′s super band Implants, and a coveted mid-afternoon spot at Soundwave Festival in Perth. Soon after in early 2014, The Decline released the fully crowd-funded ‘Can I Borrow A Feeling’ EP before jumping straight back into a heavy touring schedule.

Their first single off the record, ‘Giving Up Is A Gateway Drug’, was premiered on Triple J’s Short.Fast.Loud and has recently been added to the renowned Triple J Unearthed radio rotation.

The Decline will also be jetting off on a European and UK tour. International fans will not be able to resist festivals such as Punk Rock Holiday in Slovenia, Brakrock Ecofest in Belgium, Rebellion Fest in UK. For those unable to attend the these incredulous festivals you can also catch The Decline playing their own shows along the way as well as playing support spots for the legendary Teenage Bottlerocket (USA) on select European/UK shows. If that is not enough, then you can catch them supporting 90’s thrash legends Biohazard in Spain. Following on from this tour, they will also be heading to Japan with Useless ID (Israel) and Versus The World (USA) before ensconcing themselves into Mexico and The USA where they’ll finish up playing The Fest14 in Gainesville, Florida.

The Decline have impressed many melodic punk fans worldwide with their fast-paced and energetic style, and catchy lyrical hooks.