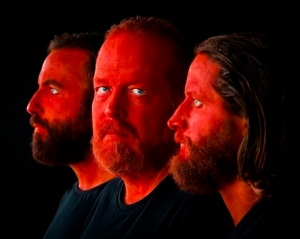 As well as a new album, the trio have also unveiled a first song extracted from this upcoming album with ‘Alien Sisters’ available right now on SoundCloud.

Mandroid of Krypton is a punk metal power trio whose ship crashed in Geneva (Switzerland) in 2010 and has never been able to leave since. Their music, self-proclaimed lyrical stellar thrash, was recorded on earth and engraved on a first LP, ‘Our Brilliant Embassies’ in 2012, followed a year later by a 7 Inch, ‘Angry SpaceZombies’. Mandroid of Krypton draws its inspiration from its rage of never seeing Krypton again, a planet where nature has reclaimed its rights, condemning the inhabitants to flee the lethal atmosphere.

Its metallic-cosmic chants now vibrate in the heart of earthlings with whom they are proud to share their second album : ‘HyperkaossMarket’, 9 tracks as threatening as an asteroid field and as soniferous as the incantations of the Krypton high priestess. You will rush into ‘HyperkaossMarket’ as you plunge into a black hole … without hoping to return!