Guitar legend and rock icon Slash, along with the supremely talented Myles Kennedy and The Conspirators continued their World On Fire tour through Europe. When RavenEye, one of the most exciting bands to emerge in the last year who are also setting the world on fire with their sound were invited to join the tour for 6 dates, this became the ultimate gig for RARC, who flew to Europe to catch 2 shows. From the indoor venue in Geneva, to the outdoor auditorium situated on the seafront in Nice, both in sweltering conditions, rock didn’t get any more awesome than this. 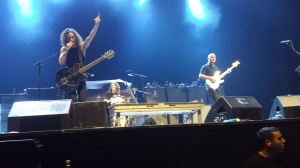 Rock trio RavenEye had driven a considerable amount of miles across Europe in scorching heat during the week before Geneva and Nice, but the band walked on stage both nights and within the first notes were there to rip it up and rock it out from the opening song ‘Get It Started’. As the monster riffs kicked in along with a pounding rhythm, it was immediately apparent that the band thrived on a crowd this size. Singer/guitarist Oli Brown launched into the set with a powerful vocal performance as the mammoth riffs rang out at both venues, whilst drummer Kev Hickman unleashed a stadium quality drum beat that would have put more well-known drummers to shame. Backing it up with a dirty and epic sounding bass line from Aaron Spiers, who moved about the stage in time to his deep-set grooves, and all 3 of them had an amazing amount of energy during their set on both nights. It didn’t take long for the crowd to go crazy for their sound, especially in France, where they took the band to their hearts almost immediately. When a band puts on a show and all of them are natural performers who have the ability to create an exciting set to watch from the outset, it transfers itself to the audience and this happened in both Geneva and Switzerland.

‘Come With Me’ continued the epic rock before ‘Oh My Love’ started with an impressive guitar solo and a gentle vocal, then a pause as it exploded into a monstrous rock song. With a very cool trick of playing the guitar in one hand, and microphone in the other, Oli showcased his talent and flair for introducing something different. As the band ripped it up through even more killer sounding riffs, there were smiles all round from both the band and the crowds, that said across the language barriers this was an amazing opening set. ‘Hey Hey Yeah’ which sounded even better when played live had the crowd clapping along from the start without any prompting and when the crowd were invited to sing along with the chorus, the sound of thousands of people singing “Hey Hey Yeah” despite the majority not knowing the track was a special moment. By the time it got to ‘Breaking Out’, which was made for arena-sized venues, the crowd were going wild in both venues and for a very good reason, as RavenEye had that rarely ability to make the hairs stand up when you watched them live, even after seeing them more than once. Engaging with the audience throughout the set, especially through their music and style of playing, both Aaron and Oli both moved in front of the crowd and at times standing on the small podium at the front in true rock star style, which this band very much are. It was left to their signature final track ‘You Got It’ to end their set, and in Nice, end their final date with Slash, and there was no holding them back despite it being a 45 minute set in searing heat. With Oli climbing on the kick drum, Aaron crouched down to the side and Kev clapping along with the crowd who needed no encouragement, this show-stopping move was watched by a crowd loving every second of it. Ripping it up for one final time, in Geneva it was onto the podium for Oli before using the amp shield to continue to play the riffs, whilst in Nice, he climbed off the stage and played up close with the crowd before climbing back on stage and the band continued to totally smash it with a riff-fuelled jam of epic proportions. As 3,000 people chanted for the band in Nice as the final notes played out, RavenEye had delivered outstanding sets that were thrilling to watch and totally deserved to be supporting Slash. 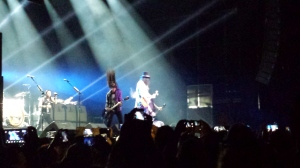 When someone has been responsible for some of the most recognisable guitar riffs in the history of rock, Slash needs no introduction. Combine this talent with Myles Kennedy who has an impressive vocal range that has produced powerful rock since The Mayfield Four, through Alter Bridge as well as a side project with Slash, and this is a musical pairing made in heaven. Backed up by the equally talented Conspirators with bassist Todd ‘Dammit’ Kerns, second guitarist Frank Sidoris and drummer Brent Fitz, whether it was recent Slash collaborations with Myles, solo work or Guns N’ Roses songs, this was about the whole band. As Slash took to the stage and the opening to ‘You’re A Lie’ played out, the cheer from the crowds at both venues was deafening. You could feel the excitement in both cities as it was a moment of awe and wonder, and with ‘Nightrain’ and ‘Avalon’ following on in quick succession, the sheer energy and power live was immense. The entire set saw the band moving along the front of the stage to the delight of the crowds, and with that signature guitar sound of Slash, this was a set full of the best rock in the world.

Geneva was treated to ‘Standing In The Sun’ whilst Nice had the epic ‘Halo’ and those who were most fortunate to catch both nights were thrilled by the changes to the songs in the set list as it meant even more excellent rock. Myles, despite seeming to spend most of the year on the road, was sounding in incredible form with his powerful vocals soaring through the night and the crowds were going wild throughout, with singing, clapping, dancing and general craziness at seeing such a spectacular show. ‘Back From Cali’ and ‘Wicked Stone’ sounded just brilliant live on both nights, whilst ‘Mr. Brownstone’ went down a storm in Geneva, but not to be outdone by ‘Double Talkin’ Jive’ in Nice. The band were clearly enjoying playing to the crowds as Todd and Frank also engaged with them, whipping them up into even more frenzied excitement, before ‘You Could Be Mine’ resounded around both venues which was an electrified atmosphere from the start. With Todd taking up lead vocals on ‘Doctor Alibi’ and again with spectacular vocals, as the opening riffs to ‘Welcome To The Jungle’ rang out, the crowd just exploded in pleasure on both nights. Who needs Axl Rose when Todd delivered this in blistering form.

Slowing things down, which let the crowd cool off slightly and with Myles back on vocals, ‘Starlight’ became a special moment in Nice, as being an outdoor venue, lighters popped up in the crowd, as well as camera lights to make this a sea of twinkling lights through the song, and being under the sky it became a touching moment. Bringing the pace back up to rock at its most mammoth sounding, ‘Beneath The Savage Sun’ and ‘The Dissident’ was unleashed on the crowd and delivered superbly, with Slash playing the double neck guitar on the latter with the ease of a man who is one of the guitar greats, making it look completely effortless. ‘Rocket Queen’ saw Slash play an extended guitar solo like no other, as it changed paced throughout, with notes soaring and dipping, from hard rock, to a more funky vibe, which being in the hands of Slash, made it sound like no other. With the band joining back in and hardly pausing for breath, ‘Bent To Fly’ was a spine tingling moment as the vocals aligned themselves perfectly with the guitars, and the night was just getting better and better with every song that was played. ‘World On Fire’ with its fast pace was delivered with precision but passion before ‘Anastasia’ continued what was just an amazing set. Loving the crowds in Europe, they were praised numerous times for being so awesome by Myles and Slash, and the feeling was very much mutual. Then came THAT riff, the one where just those eight notes at the beginning tells you exactly what the song is. ‘Sweet Child O’ Mine’, which was sung by both Myles and the entire crowd at both venues. Whether it was a favourite song or not, there was no denying seeing this played live was a defining moment in anyone’s gig going history and Myles did a perfect vocal performance for this song. Slash, well nothing more needed to be said about his rendition of this classic song, it was just outstanding. As if that wasn’t amazing enough, then ‘Slither’ played live by the master himself was incredible. As with all the cover songs, Myles delivered them in his own style and there may be some bias here but on a personal note, think he did a far better job of it, regardless of the range of the songs. With two epic songs, this ended the sets on both nights, which had been totally awesome and breathtaking throughout. 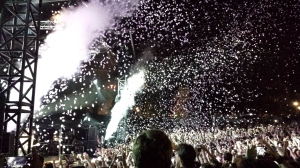 However, it wouldn’t be a complete Slash gig without a certain song that continues to delight crowds around the world almost 30 years on. ‘Paradise City’ was the only encore possible as both venues heaved with a mass of bodies rocking out to this iconic track and singing every word. As the song played out, cannons of ticker-tape erupted in front of the stage to rain down on the crowds and as the last pieces of paper floated through the air, the evening was brought to a close.

In the list of the greatest gigs to see in a lifetime, both Geneva and Nice were very much at the top of them all. With just a couple more dates left on their European Tour, the crowds in Europe have been treated to night after night of an amazing show with Slash Featuring Myles Kennedy And The Conspirators , and this really was the ultimate gig you could ever wish to go to. It was a hot, sweaty but delighted crowd still buzzing that left each venue after the show was over.

Additional photos from the gigs can be viewed on Flickr