The Devil Wears Prada Have A New Concept 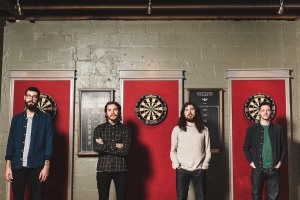 The Devil Wears Prada’s first official release since 2013, the conceptual ‘Space’ EP, is due on August 21st (Rise Records). Pre-orders can be placed at http://tdwp.merchnow.com

The ‘Space’ EP is comprised of six songs and is a wholly-collaborative effort, with all band members – Mike Hranica (vocals), Jeremy DePoyster (rhythm guitar, clean vocals), Andy Trick (bass), Daniel Williams (drums), and touring musicians Jonathan Gering (keyboards), and Kyle Sipress (lead guitar) – contributing. The end result is a collection of thematic songs that each explores a different point of view of space and those things that exist outside of the Earth’s province – the sun, the moon, aliens, asteroids, and the interstellar space explorer.

The very metal ‘Space’ EP features some of the most sophisticated lyrics, arrangements, and musicianship The Devil Wears Prada has produced, depicting the emptiness, loneliness and vastness of space. “Planet A,” tells the story of an interplanetary ship’s commander; “Alien” is straightforward and brutal, leaving no hope for the survival of mankind. Fear, arrogance and a near-incantation of what’s really important in life are at the centre of “Asteroids.”