Well Hung Heart, RavenEye, Live At The Half Moon, London 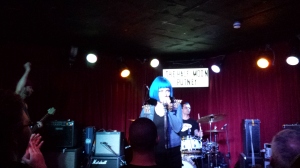 When you get two excellent bands playing the same venue it’s always going to be a good night, when Well Hung Heart and RavenEye play together it becomes an explosive combination. ZZ Top many have been playing Wembley on the same night, but The Half Moon was the only place to be at in London on Wednesday. 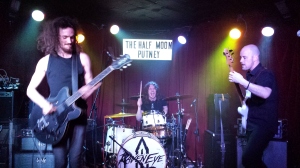 Setting out on a mammoth road trip across Europe in the same week to play 4 shows supporting Slash, RavenEye could have taken their foot off the gas for their 2 UK shows with Well Hung Heart, but that is just not their style. Unleashing their dark side of rock, ‘Get It Started’ kicked off a powerful performance from them and saw bassist Aaron unwind like a coiled spring with some seriously impressive moves as he swooped and bounded across the stage. With a megawatt smile from drummer Kev as he twirled his sticks and pounded the drums in an almost primal way, singer/guitarist Oli was a bundle of energy, only standing relatively still when singing. Making full use of the small stage, during the infectious ‘Come With Me’, the crowd watched in awe as the band ripped it up with a performance worthy of a stadium venue. ‘Run Away’ and ‘No Body’s Soul’ filled the room with vocals and riffs that sounded superb throughout, and ‘Hey Hey Yeah’ got the crowd involved with them singing back to the band during the chorus, as this a mother of a song when played live. Not content with just using the entire stage, it was into the crowd as well at one point to the delight of everyone there, as Oli snaked his way through the room and rocked out alongside them. RavenEye don’t just play a song, they totally entertain and during ‘Oh My Love’ Oli played part of this song with the microphone in one hand, whilst not missing a single chord of monstrous proportions with the other. The bigger the riff, the better and ‘Breaking Out’ delivered this in a jaw-dropping way. Although it is great to see them in a more intimate venue from a fan point of view, with music like this, they should be playing to far bigger crowds as RavenEye are born for the arena. Ending with ‘You Got It’ and their signature sign off with Oli climbing on to the kick drum, it really was impossible to describe just how electrifying their performance was, and needed to be seen to experience such a stunning set.

Some bands may have wondered how to follow on from such a brilliant opener, but Well Hung Heart took it in their stride and delivered a blinding set. With spectacular neon blue hair, singer Greta may have looked elfin but with powerful vocals resounding through the room, as ‘Devil’ thundered through the speakers, this set was going to be every bit as special. How the single guitar of Robin could make such gorgeous tones surely defined the laws of sound and with drummer Kev (it was the night for drummers of the same name) pounding the skins, the trio sounded like there were at least a couple more people off stage playing along. ‘Breathe’ with its hypnotic beat, had vocals that screamed with power, and watching Greta interact with the crowd was a sight to behold. ‘Lights Out’ continued the impressive set and with the crowd joining in with a rendition of ‘What’s Love Got To Do With It’ at one point, the night was a super-charged frenzy of rock. ‘This Is Not Love’ with its grooving beat and sublime vocals continued to both amaze and delight the crowd, and ‘Play Me’ was a maelstrom of delicious rock. ‘Torch Sky’ upped the ante even more and delivered a powerful punch in the face and all the time you couldn’t fail to take your eyes off Greta as she moved across the stage in a haze of blue hair. ‘Sweet’ with its blues-drenched tones and immense vocals had the crowd rooted to the spot with such a stunning live performance of this, before the tempo once again hit fever levels with ‘Big Plans’. With Greta and Robin weaving and bobbing around each other throughout, the crowd also moved in a seething mass of bodies as the entire room rocked out with wild abandon, before ‘Thrown’ continued to keep up the pace of this blistering set. ‘Black Lightening’ was a filthy monster of a track as the dirty grooves engulfed everyone there, with an impressive guitar sound and at times the entire room became the stage as Greta moved through the crowd and at one point kneeled on the floor during their phenomenal set. ‘Killing’ saw the band absolutely slay it before ‘Bullshit’ with its infusion of rap and rock was far better than anything else in that genre, as Greta spat out the vocals with a massive slab of energy and passion. Ending with a mash up of ‘Whole Lotta Love’ and peppered with snippets from the Beastie Boys, the epic guitar riffs continued to impress, before Greta and Robin collapsed on top of each other on stage, rounding off what had been a spectacular performance from the band. When live music is this excellent, you can’t help but fall in love with Well Hung Heart.