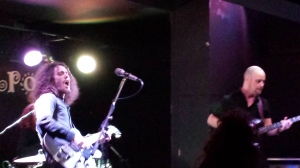 It was the first headline show of the year for the Oli Brown Band with a triumphant return to The Flowerpot in Derby. With a mixture of blues, rock and acoustic songs, this was a set that had everything you could ever wish for in an evening of live music. 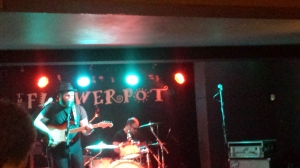 Ross Connor took to the stage an immediately sounded far more than just a guitar and drum 2 piece, with a heavier sound of blues rock thumping through the amp. With a rich, gravelly vocal that resonated in the venue, this was foot-stomping music from the outset. ‘Ain’t No Fool’ and ‘Wondering Blues’ were songs full of delectable bluesy riffs and notes, whilst the rhythm section enhanced the deep and vibrant tones of the songs. Ross had a southern US vibe about the songs that sounded more Mississippi than Milton Keynes and picking up the tempo with ‘Money Spider’ which had touch of country blues, the set was packed full of excellent songs. A couple of covers, Robert Johnson’s ‘Walking Blues’ and the Eric Clapton song ‘No One Knows When You’re Down And Out’ were both sung in a more pronounced blues style and brought a slightly heavier tone to them, which suited the set really well. With the infectious hooks of ‘Solitary Woman’ and ‘Nobody Knows’ it certainly was a brilliant start to the night, and ‘Need Me A Woman’ further cemented the fact that Ross Connor is one of those musicians who excels on the stage. An excellent choice of support and hopefully Ross Connor will be playing more live dates in the future, as he is one blues artist you need to see.

It may have been a while but Oli Brown was back on the open road with his band to the delight of the crowd. Opening with ‘Thinking About Her’ it was straight into the blues, with the deeper notes complimenting the bass and that voice all combining to make it thrilling to watch from the start. Oli Brown has come a long way since his teenage years recording ‘Open Road’, his immense talent shines through from the opening notes of the set, he plays with such energy, passion and vibrancy in whatever style of music, and this is what makes him such a joy to watch live. With Kev Hickman on drums and Aaron Spiers on bass completing the band for the solo shows, they brought with them a more exuberant tone to the songs, and enhanced every note and hook played by Oli, who was a maestro on the guitar with the way he made it sound, be it soft or loud, delicate notes or killer riffs. With songs from across all 3 albums, there was a mixture to delight everyone there, with excellent versions of ‘Manic Bloom ‘and ‘Speechless’, to the fast paced country-blues ‘Evil Soul’ which has a skiffle influence, before it was on to ‘The Devil In Me’ with its delicious groove as the vocals glided through the song.

Then Oli remained alone on the stage to play a 3 song acoustic set, which was just absolutely stunning, this was a real goosebumps moment that left you rooted to the spot and totally bewitched by the performance. With just the guitar and that velvety voice, he weaved a spell with such a passionate performance, full of lyrics that tell a story you can connect with and ‘Easy Lover’ and ‘I’m In Over My Head’, although toned down, were in a way far more powerful. Then ‘Wasted Love’ was sung and it was just one of those wow moments, with Oli’s vocals soaring over the guitar, only someone with a heart of stone could fail to be moved by such a sublime and breathtaking performance.

Bringing the tone into a more upbeat tempo again ‘You Can Only Blame Yourself’ and ‘Love’s Gone Cold’ with its blues infused tone where every note was a joy to hear, as well as a superb bass solo which showcased the versatile skills of Aaron. The D’Angelo cover of ‘Brown Sugar’ with a more funky rhythm went down well with the crowd and ‘Mr Wilson’ had an extended guitar solo that came alive in the hands of Oli Brown and why he is one of the greatest guitarists of his generation. The very popular ‘Stone Cold (Roxanne)’ came to life in the venue as the crowd sang back “Roxanne” with equal enthusiasm and rounded off what had been a spectacular set.

With the crowd shouting for more it was left to ‘Black Betty’, which in the hands of the Oli Brown Band was a maelstrom of sound, with a monumental drum solo from Kev, that was measured, controlled and exciting to watch, and the band along with the crowd were making the most of the final song of the evening as the entire room reverberated to the sound of clapping and singing. Blues, Rock, Acoustic, Oli Brown was the master of them all at The Flowerpot and regardless of which genre was played, none of the music need a definition as it was quite simply a sensational live performance.