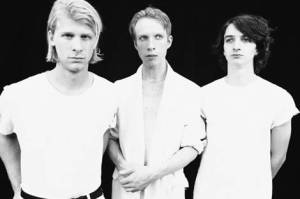 ‘Little Earth’ is the title track from their debut album, which gets a UK release on June 1st. The album is nine ice-cool tracks that recall their contemporaries Iceage, if they’d studied Joy Division and Echo and the Bunnymen instead of Minor Threat. Despite the clear 80s influence, there is a dark intensity and pop-smarts to the band, as recent single ‘Soft Skin’ has shown.

The band will be performing at an album release show at London’s The Waiting Room, June 10th.

Shiny Darky have already gained a considerable following from performances at SxSW, CMW, Roskilde Festival, Iceland Airwaves, Reeperbahn, Eurosonic, Liverpool Sound City and The Great Escape, plus a multitude of venues, injecting their haunting sound into the dark heart of the new wave of Nordic Noir music.