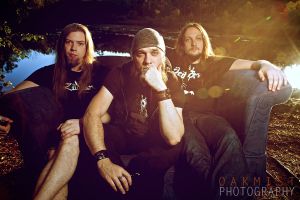 Morass Of Molasses describe themselves as “Sludge master generals of the Reading scene; Morass Of Molasses create the kind of lumbering swampy blues riffs, which induce involuntary head nodding.” Having seen the band play an excellent live set at the Icebreaker Festival recently, there is absolutely no arguing with that.

Formed in 2013, members Bones (Baritone Guitar/Vocals), Phil (Guitar) and Chris (Drums) are a band that have a rich tone to them, partly due to the fact that instead of a bass, a baritone guitar is used instead. This brings with it a filthy resonance that produces massive sounding guitar riffs, with an enormous slab of sludge. Add in a thunderous rhythm, with vocals that send shivers down your spine at times with their tone, and you end up with a dynamic sound you just can’t get enough of. Morass Of Molasses drags you kicking and screaming into their swamp and you are powerless to resist their potent sound from the very first notes.

There are heavy, almost grooving stoner elements and the vocals alternate between almost whispering and atmospheric at times, to exploding into a powerful crescendo of sound, all of which are very melodic, and brings with it a sense that the lyrics are well thought out and are very much of the same importance as the music is. This is a band that is heavy, filthy, sludgy and has a pulverising rhythm section that submerges you in those swampy blues riffs the band so aptly describe themselves as having.

Morass Of Molasses are currently remixing and remastering tracks for their 4 song EP which is due out in April, and the “songs will be longer and more cohesive as a single piece of Art” according to Bones. Seeing as the tracks sound amazing in their current form, the new songs will be stunning when they are released.

The band have also confirmed some live dates over the next couple of months:

Morass Of Molasses produce an electrifying sound and if that wasn’t enough, Bones also more than manages to impress with that beard.

The band are on Facebook http://www.facebook.com/MorassOfMolasses and Twitter @morassmolasses
The Morass Of Molasses bandcamp page is http://morassofmolasses.bandcamp.com