Young Guns Aim For Number One 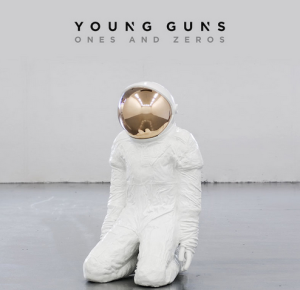 Young Guns have released their debut album ‘Ones And Zeros’.

Young Guns have emerged as one of the UK’s most electrifying new bands, garnering heavy radio play and both US and UK chart success, whilst playing to packed houses worldwide. The band have attracted critical acclaim from esteemed tastemakers in their home country, like Kerrang and BBC Radio 1, while drawing attention from US outlets like AltSounds, Billboard and Buzznet.

The emphatic five-piece’s new single ‘Rising Up’ premiered exclusively on Alternative Press, and reached the top 30. Additionally, their track ‘Daylight’ premiered with Red Bull and the band were quick to follow with a third instalment, the swooping track, ‘Infinity’, via Entertainment Weekly. The enigmatic group finally debut their highly anticipated LP, ‘Ones and Zeros’, which exclusively premiered via iTunes Radio First Play.

The band also brought their electric live shows to the United States on a monster tour of the country with Three Days Grace. The tour followed a support slot with Breaking Benjamin and Black Stone Cherry, plus numerous festival appearances including Rock on the Range.

The album is available from iTunes, Amazon, Google Play, HMV and the official store on the band’s website .