Camden Rocks played host to its annual day of rock which saw 200 bands play 20 venues. With a party atmosphere through the day and people just out to have a good time, London was the place to be to soak up all that the best rock had to offer.

It may have been the first set of the day with a 12pm start at Proud, but Dirty Thrills were off to an excellent start to the day with an energetic set. Starting the set with ‘Rock N Roll’, they did just that from the very first note as they bounced across the stage making some killer rock star moves. During ‘Shivers’ their bassist Aaron took the floor with the crowd, as the vocals from Louis soared through the venue. With the infectious guitar intro on ‘No Resolve’ and an addictive rhythm throughout, ‘Follow Me Home’ picked up the pace even more and this was a song to get the entire crowd going. Dirty Thrills have to be one of the most original and exciting bands around at the moment and they showed this with their set. Ending with ‘Sigh’ which saw guitarist Jack also snake his way through the crowd during the intro of the song, Dirty Thrills had put on an excellent set and you couldn’t have wished for a better start to Camden Rocks.

The Hawley Arms may have been one of the smaller venues but the crowd was packed out to the door to see 4 piece girl band The Franklys. With their guitars producing epic riffs from the outset, the vocals of Jen resounding around the venue, and a delicious rhythm to back it all up, the band rocked their way through an impressive set. With a mixture of old and new songs, ‘Long Way Round’ saw the band tear up the small stage, whilst ‘What You Said’ with its pounding beat and plenty of heavy riffs from the monster sounding guitars had the crowd rocking along. Sometimes moving into a softer style showed how versatile the band are, along with the fuzz infused ‘Bad News’ that screamed rock at you. Being part of the new crop of female bands around at the the moment, The Franklys put their rock and roll stamp on Camden Rocks in a most triumphant way.

The sun made an appearance for Buck & Evans who were at Dingwalls, but even if it hadn’t the band definitely shone through with their performance. Their blues rock had a sound that left you spellbound, hanging on to every note, and it was the perfect combination with the impressively powerful vocals of Sally Ann Evans, the subtle yet masterful guitars of Chris Buck and a rhythm that grooved it way through each track. ‘Going Home’ had a delicate touch that drew you into the song, before a heavenly guitar solo weaved its way through the mid-section. ‘Screaming’ picked up the tempo and one of those songs that always sounds brilliant live, the contrasts work so well as it starts off with a soft tone, before a wall of sound hits you and the vocals give that wow factor. ‘Simple’ was far from it with its intricate melodies and ‘Ain’t No Moonlight’ with its groove-led riffs left the crowd wanting so much more from the band. One of the highlights of the day, Buck & Evans put on a spectacular performance. 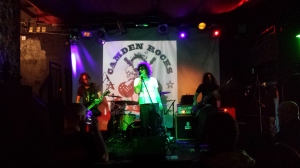 Venrez graced the stage of The Purple Turtle mid-afternoon and those that weren’t there missed out on something special. Having performed a run of 9 shows with Richie Ramone across the UK, the band were showing no signs of this, with singer Venrez putting on a performance that was both mesmerising and energy fuelled in equal parts. With their hard rock sound and harmonies that sounded sublime throughout, ‘Karma’ kicked off the set in epic rock style as the guitar crunched along to a darker vocal. With Ven engaging with the crowd throughout the set, ‘Children Of The Drones’ was a force to be reckoned with live and the beat thumped out to make it a killer song. ‘Devil’s Due’ powered its way through the track and sounded immense in the venue as the vocals entwined with the heavy rhythm. ‘Yesterday Has Gone’ was one of those songs that you just had to rock out to, before ‘Hang The Predator’ with one of the most delicious sounding melodies heard in a long time, made sure their set was going to be one to remembered for a very long time. Venrez totally killed it with their powerful set.

The Stillery couldn’t have been more packed out when Rival State performed their slot at Camden. With their appearance at Download this year one of the best inclusions, they set about showing the crowd why this is one of the bands to see live. Vibrant and full of energy from the very first note, singer Luke didn’t let the scene of a packed out venue confine him to the stage as he worked his way through the crowd at various points throughout. ‘Aces’ had an entire room moving heads in unison to this epic sounding track, and ‘Four Leaf Clover’ proved that there was no luck involved in why this band are on the rise with such a brilliant and powerful track. With a thumping rhythm that was heard across the borough, it was loud, brash and in your face rock. New song ‘Modern Living’ heated things up even more as the temperature rose in an already warm venue, before ‘Sleep Talker’ blew the place apart with that chorus and those sublime riffs. Rival State put on an epic performance that was one you didn’t want to miss out on.

It was back The Purple Turtle to soak up a heavier set from Monument for the early evening slot. As an impressive amount of hair went flying from the stage alone, the dual guitars screamed out on ‘Fatal Attack’, whilst the substantial vocals of Peter Ellis soared over a deep set rhythm. With some excellent co-ordinated axe-wielding moves throughout the set, this was fast paced and full of guitar laden hooks and metal riffs with ‘Runaway’ powering its way through the set at breakneck speed. Instrumental track ‘Red Dragon’ gave a chance for the band to show off their excellent musicianship as they filled the venue with riff-drenched power chords and giving the crowd a choice of what to play, it was ‘Crusaders’ that won the public vote, and who showed their appreciation of this song but headbanging along to it with vengeance. Ending on ‘Rock The Night’ with vocals that were off the scale, Monument more than rocked the night, they rocked the whole of The Purple Turtle for a brilliant 30 minutes they were on the stage.

The Monarch was the venue of choice to see The Wild Lies put on a majestic set. With a slightly retro sounding classic rock sound at times, the band also had a modern sounding twist to them as they thundered their way through some seriously good guitar licks. With a stadium quality sound about them, songs such as ‘Relive The Ride’ bounced off the walls of the venue with a surprising amount of power for one of the more intimate venues. With singer Matthew James looking every inch the rock star in terms of both vocals performance and how he worked the crowd, this was a highly entertaining set from them. Another band destined for Download this year, this was exactly the quality of rock as fan you want to hear, and ‘Falling’ continued to impress with its heavy set guitars and rhythm. ‘Magpie’ upped the tempo and the fever pitch of the crowd and The Wild Lies reigned supreme with a brilliant set.

With a queue snaking around the street outside The Underworld 45 minutes before their set was due to begin, Heaven’s Basement were definitely one of the most popular choices of the day to see and with an electrifying set from start to finish, they didn’t disappoint an crowd that waited in anticipation to see them. ‘I Am Electric’ kicked off the set with singer Aaron launching himself into the crowd to surf over it at the beginning of the song, and it was a fist pumping, face-melting set throughout from the band. With the crowd singing along with the band, snippets of Queen interspersed through one song and ‘Can’t Let Go’ pulversing the venue, it was chaotic and energetic, as the room seethed with a mass of bodies. ‘Lights Go Out In London’ went down well with the crowd as the band shone through with an impressive set of their powerful rock sound. ‘Nothing Left To Lose’ was an intoxicating maelstrom of guitars over a heavy beat as the vocals screamed out rock to a crowd that lapped up every note. Even toning things down with ‘Price We Pay’ didn’t nothing to dampen the enthusiasm everyone had seeing the band, with this powerhouse of a ballad. It was left to ‘Fire, Fire’ with its thunderous beat and enormous riffs to bring to their hour long set to a wondrous close and for those that spent a long time waiting, they were very much rewarded with a superb set from Heaven’s Basement.

They may not have been the official headliners for Camden Rocks, but Buffalo Summer were the headliners as far as RARC was concerned. A final trip to The Purple Turtle for the day meant we were in excellent company as despite some heavy competition from other bands, the crowd knew this was the place to be at. When they started the set with the classic ‘A Horse Called Freedom’ and the crowd went mad from the first notes, you knew this is going to be something very special to see. This song had so much groove to it, that not one person there was able to stand still to such a magnificent start. ‘Ain’t No Other’ had Darren pointing his bass to the ceiling whilst singer Andrew swirled around the stage, with hair flying in all directions and defying gravity at times. With their debut album being rather stunning, ‘Truth From Fable’ was a popular choice with its delectable melodies and crisp guitars. With the additions of new songs ‘Make You Mine’ and ‘Heartbreakin’ teasing the crowd with just how excellent their long-awaited second album is going to sound, it was thrilling to watch the band live. ‘March Of The Buffalo’ stomped its way through and had the floor not been so sticky at this late time, the crowd would have foot-stomped along as well. “All live, no backing tapes, no bullshit rock and roll” was probably an understatement from singer Andrew as live music didn’t get any better than this moment and truly summed up the entire day. ‘Bird On A Wire’ continued a set packed with their immense sounding rock and during ‘Rolls On Through’ saw Andrew mingling with those there during the soaring guitar break towards the end in a most rock and roll way, much to everyone’s delight. ‘Down To The River’ was anthemic, hands clapping in time to the beat and the entire crowd singing along with the chorus, with all there becoming part of the band for that song, before ‘Into Your Head’ closed what had been another exhilarating set from them. It’s impossible to describe just how good Buffalo Summer were, except to say they were truly outstanding.