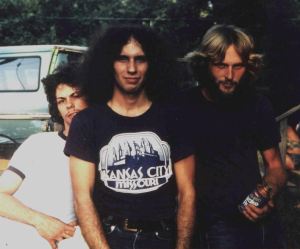 JPT Scare Band will be releasing on 28th April a special LP set consisting of their first two album releases ‘Acid Acetate Excursion’ and ‘Rape Of The Titan’s Sirens’ via Ripple Music. Originally recorded in the 1970’s, these albums have been out of print since the original Monster Records release in the early 90’s and represent the full early history of the band. The re-released albums will come with new gatefold album art that incorporates the images of the original two albums.

Formed by Terry Swope (Guitars/Vocals), Paul Grigsby (Bass) Jeff Littrell (Drums) in the early 70’s, JPT Scare Band began recording songs in their Kansas City basement and soon compiled a vault full of reel-to-reel tapes that would make up much of the band’s catalogue.