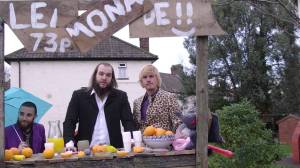 Leeds based The Blind Dead McJones Band are about the release their second album ‘Everybody’s Making Lemonade’ on 14th March.

Members Ben “Buddy” Slack, Andy “The Cake” Johnson and Steve “Wee-Man” Nixon got together in 2008 with a little help from the fabled and somewhat elusive Blind Dead McJones himself and released their debut album ‘Last Resort Mexico ‘in 2012, which received great reviews and a British Blues Award nomination for “Best Original Song”.

The band are now following up their debut release with ‘Everybody’s Making Lemonade’ which is an eclectic mixture of blues rock. Although the title track ‘Everybody’s Making Lemonade’ is an acapella song, this masks the powerful rockier tone the band have on the second track ‘Raised By Wolves’. With a vocal sound that harks back to the good old days of rock and roll, tracks such as ‘Too Young To Be Afraid’ and ‘Whistlin’ Willies Blues’ both have a darker sound to the songs, whilst ‘Deep Blue Sea’ and ‘The Burden’ have a rich blues vibe to them. ‘Rust’ has more of a rock sound to the song, with deep guitar riffs as well as harmonious vocals. ‘I Sharpen My Blade’ has a slow tempo to the song as the rhythm section thumps its way through the track over gentle vocals, before ‘At My Funeral’ picks up the pace again with delicious sounding guitars that add a richness to the track, along with a catchy bass line.

Going on the song titles alone you get the impression that The Blind Dead McJones Band have a sense of humour and don’t always take themselves too seriously, but once you hear how good the album sounds, you realise the band is all about making excellent sounding blues-infused rock and whilst a little quirky in places, ‘Everybody’s Making Lemonade’ does just that.